You may not know this, but I happen to be friends with one of the coolest people on earth. Her name is Sara and she looks like this: 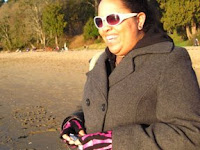 Yesterday at around 2pm, I received an email. It was from Sara. The subject heading was, "Are You Free Tonight?" Intriguing, I thought to myself. I do believe I am free tonight. The body read:

"So, I know this is totally last minute but I really want to see Rufus Wainwright tonight (at first I didn't really consider going because I thought it'd be the same show that we saw in July but I as far as I can tell it will be different) and I don't want to go alone and was wondering if you'd like to go with me. I asked my mom to go which she declined, but said she'd get me tickets (because she's the most awesome mom ever and compared to concerts she likes [like the rolling stones] she thinks the tickets are cheap)."

Talk about last minute! Isn't she the greatest? Aren't you all jealous? You should be. She's the best. Well, maybe second best, after her mom. Not to brag or anything, but she also took me to Muse and a handful of other concerts. Not to mention the fact that she introduced me to Doctor Who, The IT Crowd, Firefly, and Russell Brand, to name a few.

Speaking of Doctor Who, I know it's supposed to be a family show, but it seriously freaks me out! I should not watch it alone at night. Now I'm terrified there's a ticking robot wearing eighteenth century clothing and a "V For Vendetta"-style mask hiding under my bed. CREEPY!! But I do so love David Tennant. Can I please please have him for my very own?

Okay, so on to Rufus Wainwright. Um, have you heard his voice? It's crystal clear! Absolutely flawless! Well, almost flawless. During the second song, he didn't quite get a trill right, so he stopped in the middle of the song saying, "That was awful!" We all worked through it together.

He's doing a "solo" tour, meaning he's playing piano and guitar for himself, without any band. When we saw him in July, he had the whole band, and he did his song and dance, and changed outfits at least twice (leiderhosen!!) But last night was just him in (really tight) jeans and what I can only assume was his favorite, argyle sweater (out of the 80's??) It was fantastic. Or as Amy likes to say, "Faaaab-ulous!"

Aw, isn't he adorable? Fighting AIDS and all. What a sweetie!

That masked robot thing is still haunting me...Time for bed!
Posted by Kusems at 4:11 PM 2 comments:

Prince Harry, third in line for the English throne, says:

"I don't want to sit around Windsor, because I generally don't like England that much."

While I don't share the sentiment, I can totally understand hating the familiar. It's just, of all people to not like England that much, you'd hope a member of the royal family wasn't one of them. But you can't blame the poor kid. He won't be king, but he still has to live with pretty big restrictions on his freedom. Plus, he's a red-head, poor thing. Life isn't fair. At least he can console himself that his once totally gorgeous older brother has a receding hairline at age 26 (or however old he is).

BBC news report
Posted by Kusems at 8:44 AM 2 comments: