I has a smartphone! Woo! It's hard to type on this thing. Have to dash back to work but will update more later, I promise!

I have a home! Yay! There were a few teething problems when I moved in, and I wasn't 100% sure that I'd made the right choice. But after a week and a half, I know that I did make the right choice. I have a studio flat all to myself! I don't have to share with anyone! And the kitchen is a decent size and in a separate room.

Problems when I moved in:

1. The whole place smells of cigarette smoke and I am allergic to it. I've improved that a bit already by removing the huge, dark red, smoke-infused curtains that made the place look like a theater (or brothel) when closed. I bought some sale curtains from work, but then found even cheaper, thicker, more appropriately-sized ones at Ikea. Already the place looks and feels lighter and airier. 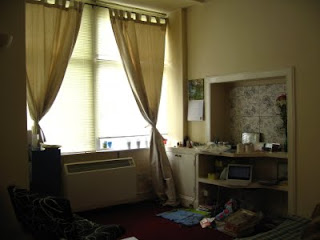 2. One of the windows wouldn't shut or lock properly (deja vu from my Seattle studio!) I called the letting agent immediately and she sent someone round to fix that. He did a pretty shoddy job, but at least my windows lock shut now and no one can just pull them open from the outside. Result!

3. The guy who moved out didn't hook the washing machine back up, and whenever I used the kitchen sink, I leaked water into the cupboard underneath it. It took me a few days to realize this was happening. Anyway, the letting agent made the guy come and hook it up properly, so all is good so far (knock on wood that it stays good!)

4. I'm on the ground level, right off the street, so if my blinds are open, anyone and everyone can see my whole life right there, so I think I'm gonna make some screens for the windows, once I figure out a good way to do that. Ikea sells some bamboo and wax paper window coverings, so I might try cutting those to size.

That's pretty much it. I've already spent most of my paycheck for July on furnishings and kitchenwares and bits and bobs, but I'm very pleased with the place. I got a futon base and a big, blue bookshelf for £13 (plus £2 delivery!) Now I just need a futon mattress and my guests will have a comfy bed to sleep on. Yays! 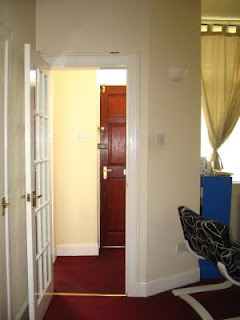 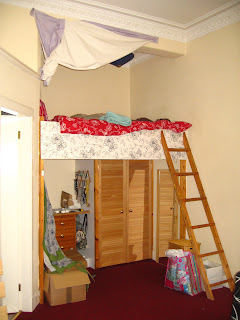 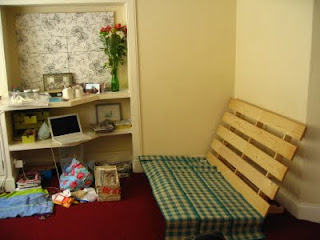 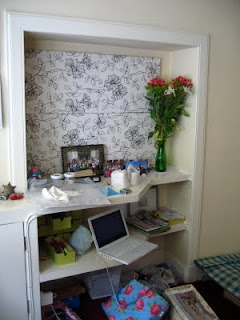 Note the flowers, from a man!! 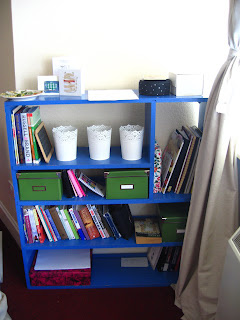