We had a big meeting today with the organisation that commissioned the big project I've been working on. It was their opportunity to comment on our first draft and provide feedback. They didn't have too much to critique, and the things they mentioned should be relatively easy to fix. They did say that they'll give themselves two weeks to really go through it and make notes of all their concerns. So I came out of the meeting terrified. My boss's boss came out of the meeting really positive and upbeat about it. I had to take a coffee and muffin break this afternoon to clear my brain and figure out why I was being so negative!

I know it's no surprise to any of you that I'm a pessimist. Part of my negative feelings relating to this meeting have to do with my own insecurities about the quality and completeness of my work, and the worry that any minute now, someone is going to point out huge flaws in it. I realised that I was assuming this was an iceberg situation: the feedback they gave in the meeting today was just them scratching the surface of the tip of an iceberg. They were just being polite, surely! Two weeks from now, I'll receive pages and pages of comments and the whole bloody thing will need a complete overall!

My boss's boss, on the other hand, heard their few criticisms and assumed it was the worst they could possibly muster. As far as he's concerned, if that's the worse, then we're doing great! They failed to congratulate us on what an awesome job we did, but if they didn't come right out and say, "The document you have submitted is a massive disappointment and not what we were hoping for at all," then they must be relatively happy with it, right?

Yes. Yes, I think so. I need to go home, look at myself in the bathroom mirror, and remind myself that I'm awesome. 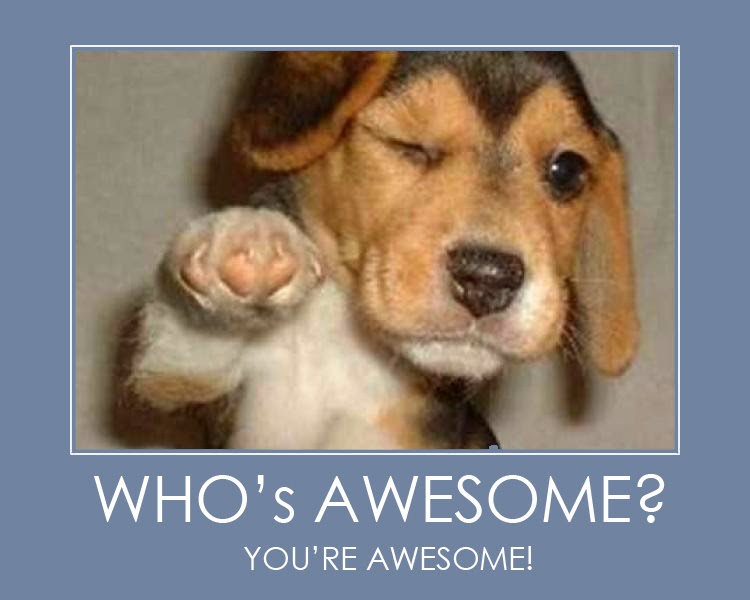 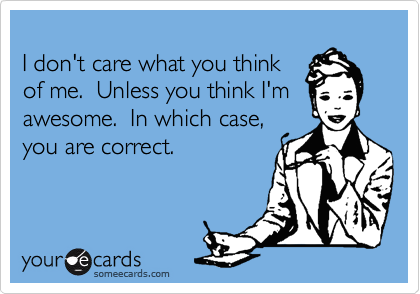 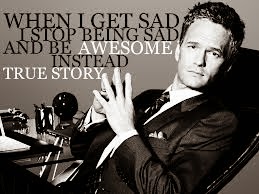 We have been busy little bees lately!
My boss and I turned in a big project last week (55 pages in Word and nearly 200 Excel tables and figures). It's a big relief to have it completed, and now I'm coasting a bit until we get feedback on it ;-D
I haven't finished any knitting projects lately, although my grey sparkly sweater isn't far off done.
Hugh and I are *hoping* to book tickets for the UK soon! We want to go in September for a distillers conference and to catch up with good old friends with whom I have been a bit crap about keeping up. (nudge nudge, Tisobel) 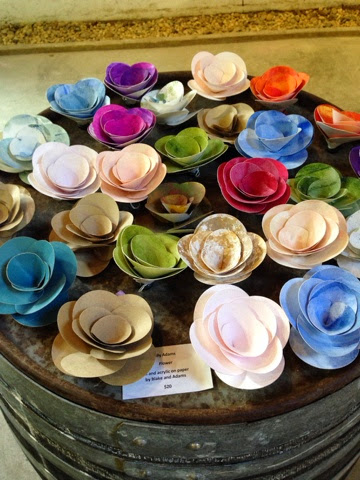 This is from a couple weeks ago when we took a couple friends to the Yarra Valley for wine and cheese. They are hand-painted paper flowers. Lovely! 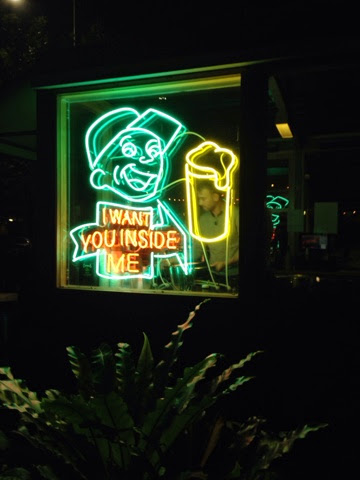 This place serves milkshakes and nachos and hot dogs with toppings. We've been there a few times, and I never noticed this sign before! 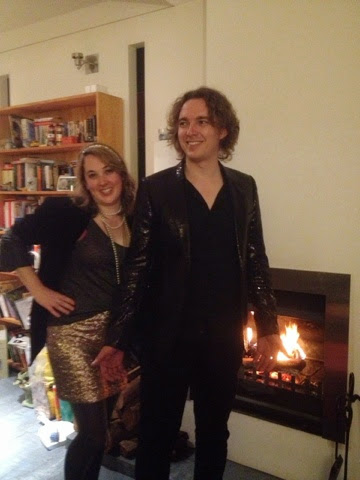 We went to a Eurovision party! Despite living in the UK for three years, I had never watched Eurovision. The Aussies are crazy for it, though! It was good fun. The hosts didn't ask us to dress up, but Eurovision is all about the glitz and glam, right? I couldn't pass up an opportunity to wear head-to-toe sparkles! 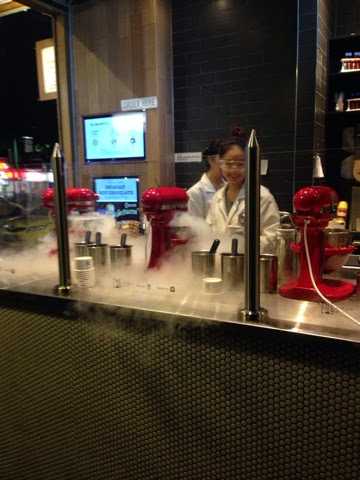 This weekend was kinda big. I took the day off Friday, got my hair done (I don't like it 😕) then met Hugh and his coworkers on a pub crawl. They started at noon. 😬 So by 8:30, I was struggling to stay awake! On Saturday, there was another beer and whiskey event (it was Good Beer Week), where I had a very small serve of Scotch ale, which I nursed for about two and a half hours. Sunday was softball, then dinner and dessert with James and Emma. They took us to The Lab, which serves gelato made (somehow) with liquid nitrogen. Hugh and others are a bit concerned about the lack of protective gear and the fact that the place has two huge liquid nitrogen tanks sitting right there between the bar and the customers. When I worked in a lab, we had to wear full face masks and heavy duty gloves when handling liquid N2. Ho hum! In the end, the gelato was pretty gelato-y. It's all about the spectacle, isn't it?
Posted by Kusems at 7:39 AM 2 comments:

Hugh had to go to Adelaide for work two weeks ago. Since we were planning to spend Easter there as well, he decided to drive to Adelaide and stay there until James, Emma, and I flew over. Then we all drove back together. So I had to spend a week and a half without my man! Eep! It was hard. I really like being around him!

Anyway, Hugh picked us up from the airport first thing Friday morning. His parents were staying at their vacation home so that we could have the house, but his dad stuck around in town long enough to say "hello" and to give me a birthday present. What a sweetie! And guess what? It was a huge lot of gorgeous wool! What a triple sweetie! (There were five balls in total.) 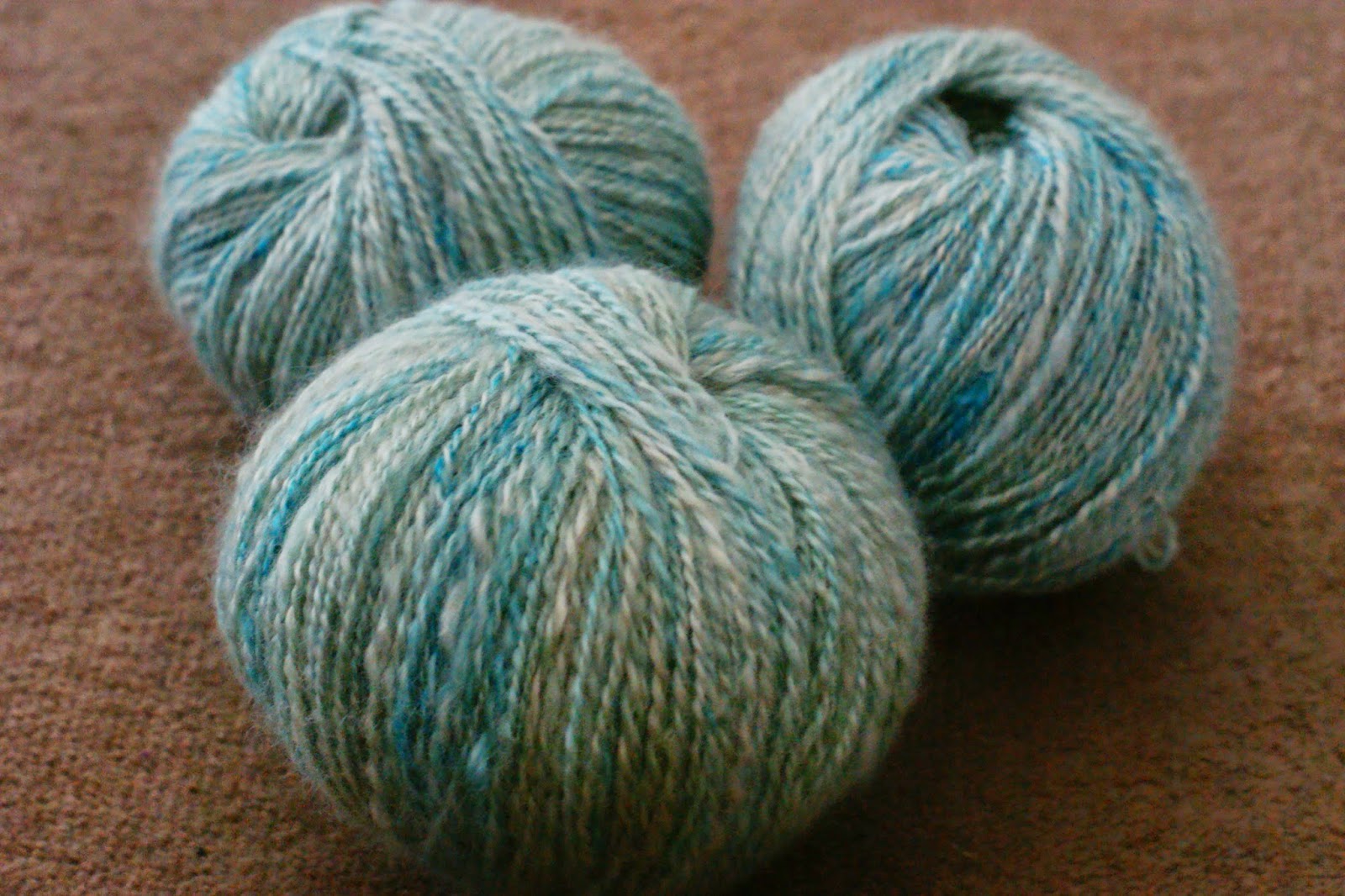 It's hand-spun and hand-dyed wool from the Handspinners and Weavers Guild of South Australia. I'm not sure yet what I'll make with it. It's a bit on the stiff and scratchy side, so wouldn't be ideal for a sweater, but I'm thinking maybe a vest? Like this one from Brooklyn Tweed, called Huxley? Or maybe a shawl. Dunno.