Can I Keep Him?

Phew, the bridal shower went perty doggone well. Michele is my super-hero for making all the food (and boy, was it delicious). I handed the plates over to Amy (who was able to make it after-all, thanks to my dad). She took the scissors and cut the scalloped edges in half the time it took me to do it, mainly because I'm a perfectionist and she's not. In the end, no one cried out in horror, "But these plates have uneven, ripped edges!!" so I suppose she did a good job. The one game I tried fell a little flat, but I got lots of positive feedback, so I'd stamp it a success. Of course, I can always nitpick the things that could have been better (I'm sure I could come up with a substantial list), but I think that, for once, I'll give myself a break. It went well.

I had a slightly traumatic experience when I came home, though. I parked next to the dumpster and, as I got out of the car, I happened to look to my left, where I noticed something sitting in front of a recycling bin. It looked like a discarded toy, a stuffed cat with something around its neck. It's paws didn't look quite right, either, but I couldn't figure out why not. What was that thing around its neck? It looked like one of those cones that people put around dogs' necks to keep them from scratching their heads. Except it wasn't one of those cones; it actually looked more like...like the neck of a broken bottle. A very realistic-looking kitten with its head stuck in the neck of a broken bottle. There was a large piece of the bottle in front of the thing's face. As I was processing this information and wondering what kind of person would put the head of a stuffed kitten through a broken bottle, the horrible thing MOVED. Then made meowing noises. I was completely weirded out at this point, so I climbed back into my car and shut the door (in fear, just to clarify). When I looked back, the thing was gone, but I could hear meowing. I was sure that someone nearby was laughing at my reaction, that I'd be on Candid Camera next week. After a frantic phone call to Jacque, I gathered my wits and started unloading my car. I went upstairs to the apartment, then back to my car to get the rest of the stuff. As I approached my car, I realized the wretched thing was hiding behind one of my tires, and he was just a little baby. My heart seriously breaks every time I think about this, and I've been thinking about it all day. I can't get the image of him out of my head. It was so disturbing! How did a kitten get its head stuck in a broken bottle? Or was the bottle whole when its head got stuck? If so, how did he get it broken? How long had he been like that? With a big piece of glass in front of its face, it probably couldn't get to any food.

When I saw him under the car, I freaked out afresh, but this time it was less because of the surreality of it all, and more because he was a helpless little baby in serious need of help. He could not have been more than 8 weeks old. I went to get Jacque and find a phone number for an animal hospital, but it was 8pm on a Sunday night so few were opened. Plus, our phone book is USELESS. Most of the listings were for a city 20 miles away. I grabbed a towel and we managed to catch the poor kitty (his reflexes weren't very quick), then we took him to an emergency animal clinic. His fur was completely matted and filthy. He smelled like oil and grease, and one of his eyes wouldn't open. The veterinarian pulled the bottle off without a problem, but found that a fly had laid eggs around the kitten's neck, and they were hatching into maggots. Jacque had held the kitten (in the towel) for the 20 minute drive, so she was more than a little grossed out to learn that. They couldn't be sure at first glance what was wrong with his eye, if it was just infected or if the eye was missing. I cringe to think that it might have been poked out or scratched by the glass bottle.

Jacque has wanted a pet for a while, but I have resisted because there is a large chunk of ice where my heart should be. But this little guy melted my cold, cold heart. I guess I have a bit of a savior complex, because I just want to coddle him to make up for all the crappy things that have filled his short life so far. Anyway, the vet said that our two options were: 1) Claim him as ours and pay $500 for his vet fees, or 2) claim him as a stray, in which case he'll be turned over to Animal Control, at no charge to us. Neither of us were prepared to fork over that substantial a sum of money (he may have melted my heart, but he hadn't melted my vice-like grip on my wallet). The vet said we could call Animal Control tomorrow to ask for information on him and put our names in to adopt him, but I don't really know what the chances are. He is probably still young enough to be domesticated, but because he was feral, he'll probably never grow to be a social, friendly cat. Then again, how many cats are social and friendly? (I should probably explain that I don't generally think very highly of cats. They remind me too much of me.)
Posted by Kusems at 1:11 PM 3 comments:

Oh my goodness, planning a bridal shower is HARD! Especially if you're both a perfectionist and a procrastinator. Martha Stewart rocks my world and all that, but how are normal people supposed to be able to do all the adorable crafts she does? "Why yes, let me just go grab my soldering iron..." Who has the money? Or the time, for that matter?

And why do special craft scissors work for her on thick paper plates, but when I go to use them, they don't cut properly? Hunh? They rip the paper and cause ragged edges. My world is falling to bits around me...

Martha Stewart's plates
(as the cherry on top of this fiasco,
Martha's website is down
and I can't get a good photo;
this is a b&w photocopy) 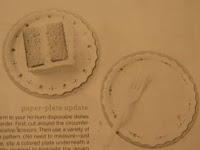 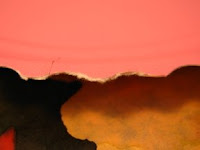 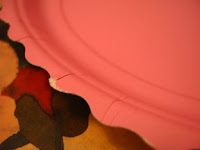 Maybe there's a reason Martha did her scalloping on white plates...

Also, should I be freaking out that ONE OF THE BRIDESMAIDS ISN'T COMING?!? Because I am! Should I be upset that she told me she wasn't coming THE DAY BEFORE THE SHOWER? Or that she may have NEVER told me, if I hadn't called her to remind her and make sure she wasn't working that day? (Of course, I called her because I knew full well that she is the WORLD'S BIGGEST FLAKE and that she would forget the date.) Okay, truth be told, I'm not really freaking out. I'm just good, ol' fashioned furious. I'm sure it'll pass. Maybe. I'm a bit of a grudge-holder.
Posted by Kusems at 3:33 AM No comments: