Too much good stuff

Hour three of my 7-hour layover in Vancouver and my eyelids are droooooping. It sucks having such a long layover so close to home when I could be spending time with the family. Oh well, at least Vancouver airport is gorgeous! It's nicer than most shopping malls here and there are (mildly creepy) Native American sculptures all over. I'm currently positioned in a comfy chair next to a burbling stream using free wifi. Eat that, Sea-Tac!

Okay, i was gonna do a blog post about visiting home, but I just feel like finding a place to stretch out and take a nap. So so tired. I managed to do all the things I was hoping to do this week, but it meant not getting very much sleep. Woops! Jet-lag is gonna be a bitch...Good thing I don't have to work the four days following my return! Oh wait, I got that backwards. I'm working full 8-hour shifts for the four days following my return...

Saying goodbye was much harder this time around. Yep, I cried. It probably has a lot to do with the fact that I was only home for six days, so I don't feel like I got to see enough of anybody. It's like when you're hungry, and someone gives you a tiny appetizer to take the edge off your hunger, but it only whets your appetite and makes you want more. I should have gone for two weeks to get satiated without feeling overstuffed. But everyone is back to work today anyway, so there wouldn't really be anyway to hang out with.

Here's what all I did:

Tuesday: arrived in snowy Seattle late morning; took bus home where Michele made me yummy lunch; caught bus to Redmond to see Jocky briefly; had dinner with Mama, Jody, Amy, and Diana; got slightly tipsy and watched Harry Potter; spent the night at Amy's, even though she wasn't there.

Wednesday: drove three hours south to Portland with Jocky and Amy, lunch with Gma, Gpa, Aunt Leslie and Uncle Steve; shopped in downtown Portland (I like it there!); dinner with Aunt Chris; three hour drive home.

Thursday: Turkey Day at Ward and Dixie's; Secret Santa name draw (I'm not telling you whose name I drew!).

Black Friday: Woke at 2:15am to go shopping with Katy and Michele (clearly, I lost my mind at some point on Thursday). Shopped until 8am, then took a nap; went shopping again at 11am; met up briefly with Jocky at Banana Republic; lunch and nice catch-up time with Ross and Sandra; watched Mama and Jody play soccer (OMG! Mama playing soccer?! Awesome!); fell asleep in my Red Robin burger; spent the night at Amy's, in her roommate's room; woken up by Amy sometime around midnight because roommate was on her way home and I had to get out of her bed.

Saturday: breakfast and Target shopping with Jody (oh Target, how I do love thee; please move to London!); brief hanging out with Mama (mostly just me playing Kinectimals); high tea with Michele, Katy, Jody, and Becky at the Queen Mary teahouse; dinner date with Pops; briefly lose my wallet, then discover it at home. Phew!

Sunday: Watch Miracle on 34th Street while Michele puts up and decorates Christmas tree; lunch with Sara and Emily in U District; snacks and bubbly at Ross and Sandra's with their newly adopted daughter and Jocky, Amy, and Diana; watch cheesy Hallmark film with Pops and Michele; cry into Pops' shoulder at the thought of leaving.

Monday: Leave it all behind once again.

I have a feeling that might have been really boring to read. Anyway, I'm amazed I got so much done. It's no surprise I feel dead tired. Sadly, I don't have many photos to show for all the hijinks, except lots of photos of Mama playing soccer. I feel an evil laugh coming on. Mwah hahaha-ha!
Posted by Kusems at 7:56 AM 2 comments:

Happy birthday to John! I hope it's wonderful!

I don't have much else to report. I still haven't signed an updated contract at work, so still don't know if they're going to offer me more money or if I'll have to demand it. I feel like threatening to leave just before Christmas should knock some sense into them. Especially as one of the other girls they just promoted just gave her two weeks notice. They're dropping like flies.

I recently read The Alchemist, which was SOOO GOOD! Now I keep thinking that I should be paying better attention to signs and omens, that the Universe/God is probably sending me messages telling me what to do next, but I'm just not paying attention. The question popped into my head the other day: If I were to leave London and move to a different city, would I miss London? And the answer was "no." I would miss Izzi and Tim, and Holly. I would miss Carina a tiny bit but I hardly ever see her. If Tanya was staying in London, I'd miss her too, but she's still not sure if she'll be sticking around or going back to Canada. And that's about it. Five people.

I was thinking about all this as I passed under the prime meridian laser the other night, and I thought, "What if the laser is an omen, pointing me to an exotic northern locale?" So I hopped onto my trusty MacBook and pulled up Google maps to see where the prime meridian passes through on it's way north from London. I quickly determined that the prime meridian is NOT a helpful omen, directing me to my next adventure, as it passes through nowhere of any interest. It comes nearish to Cambridge, which is kind of a nice place but I didn't really like it that much, and Hull, which by all accounts is one of the most miserable places on earth. Then the line shoots off into the North Sea. So yeah. Back to the drawing board.
Posted by Kusems at 10:28 PM 1 comment:

Back on the funny farm

Happy 26th birthday to the best second-youngest sister a girl could ask for! I miss you, Jodifer, but I'll see you soon! Also, while I'm at it, a very happy early birthday to Sandra and John! Can't wait to see you ALL!

Man, I had such a great weekend!!! I wasn't scheduled for Wednesday or Thursday, my first two days off in two months. I decided to get lots of work done for PhD guy, who sent me an email earlier in the week saying the WHO wants to see a publication by December so let's really rush this through. Eeps! Izzi and Tim invited me over for dinner Wednesday, and I was happy for once to not have to ask them to push it back until 8 or 9pm. Izzi made a delicious pie with chicken and bacon (my favorite!) She would like me to set the record straight, and I'm happy to oblige: my last post implied a bit that she and Tim are narcissists. This is not at all true. Only Tim is a narcissist. :-) He's still wonderful, though. He's growing a 'tache for Movember to raise awareness for prostate cancer, and though I'm normally a total 'tache hater, I feel I can support them for charity's sake. Also, I want to see what he manages to shape it into.

Tanya returned to London this week after a 5-month hiatus back home (Canada) so Holly suggested we all go to the Farm for the weekend, and go to Bonfire Night in Lewes (I went last year and it was SO MUCH FUN!) She asked if I could get Friday off work, which I was able to do in the end, and then on Thursday, a girl randomly asked if she could work for me on Saturday. So I had FOUR days off IN A ROW! Amazing!!! And I got to go to the Farm! And spend three days with Tanya! (and Holly, of course) So wonderful. We got to play with the baby (getting so big and clever!) and romp through the fields. Tanya, in her usual wide-eyed-wonderment way, asked, "So when you guys were little, you could just pick a field to run through?" (They do have a heckuva lotta fields. Full of deer, no less!) Holly's parents bought the farm in the 70s cuz they were hippies and wanted to work the land and live with friends and family around and raise their kids in a healthy, rural environment. Her older brother lives in a little room off the side of the house, and her sister and brother-in-law live with their little girl in a house across the driveway, but they're building a house in one of the fields. Her aunt and uncle live on the neighboring plot of land. Apparently, it's Holly's dad's dream that she and all her friends move into the big house and make it like some sort of happy commune. Yes, please! I would move there in a heartbeat. 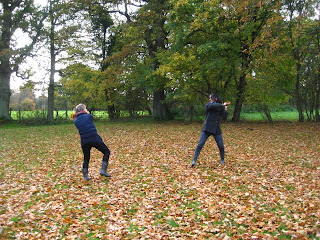 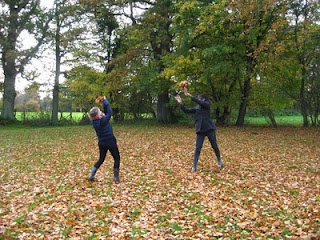 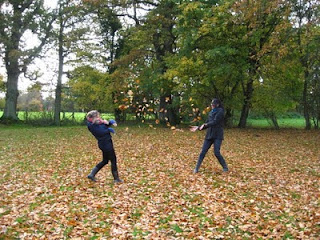 (By the way, while I'm thinking about it: Ross, I LOVE my camera! I know you gave it to me five years ago, and there are probably more amazing ones are the market now, but it's such a great camera! The above series of photos wouldn't have been possible without the multiple-shot function, and I also used the color accent function a ton.) 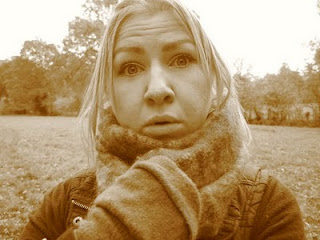 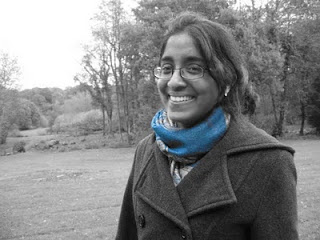 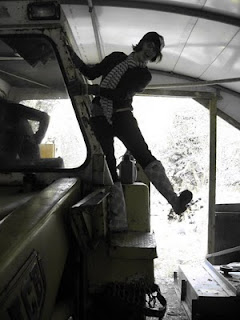 We returned to London on Saturday to celebrate Aparna's birthday by letting Aparna cook us all a curry. It was super yummy. I'm hoping to absorb some good cooking tips from her, by allowing her to cook all my meals for me and half listen to her telling me what she's doing as she goes along. :-D
Posted by Kusems at 5:34 AM 1 comment: