After meeting Hugh at the international airport in Sydney (not to be confused with the domestic airport, which for some inexplicable reason, is separate and nearby, but far enough away that you have to take the subway to get between the two), we hopped on the train and headed into the city. We got off at the Town Hall stop, which brought us into the Queen Victoria Building, a beautiful Victorian-era shopping arcade. (Apparently, the architectural style is "Romanesque Revival") We pulled my four pieces of luggage the length of the building, then exited at the side to reach the street. I expected to be walking at least a couple blocks more, but Hugh led me across the road and straight into the Hilton. The Hilton!! This boy spoils me way too much. We were on the 22nd floor (out of 42 or so?), in a corner room overlooking the Queen Victoria Building. Then he really spoiled me for dinner, with chicken mayo sandwiches from McDonald's ;-)

On Wednesday, Hugh had made a reservation for dinner, but wouldn't tell me where. He took me shopping so he could buy me a dress, but I was being difficult because a) I didn't need a dress (I brought a few in my luggage) and b) I didn't like anything we saw. There was one dress that we both quite liked, but it didn't fit perfectly...and it cost $650. I did let him buy me a $30 sale skirt from Roxy, though. It's super cute!


I had talked with a lot of people about the fact that I was going from summer in Seattle to winter in Australia, and I had been cavalier about it. I figured their winter wouldn't be that different from our summer. When we arrived, it was drizzling rain and slightly on the chilly side (say, mid 50's). We took a break from shopping to have a snack at the department store cafe, and looking out over a park, I was struck by the similarity of the scene to London. Some of the trees had lost their leaves, which was the one thing I hadn't really prepared myself for. It was a jolt to my sub-conscious.

Hugh and I dressed up all pretty for dinner, then walked several blocks to (drumroll)...


Rockpool Bar and Grill. Don't be fooled by the "bar and grill" bit. While this place had a casual vibe, it was very fancy and very well thought-out. Set in an old bank, it is one of the posher restaurants in Sydney. The service was very attentive and the food was impeccable. I really enjoyed myself, until I a) started to feel uncomfortably full, and b) jetlag hit and I started panicking about meeting Hugh's family. Anyway, all good fun! 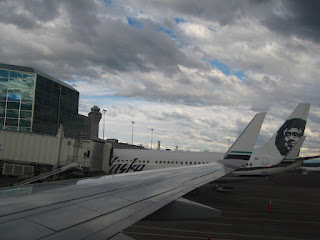 I'm here!! I'm in Australia! After a whirlwind weekend in Portland with the grandparents and aunts, I shipped off to Honolulu for one night, then to Sydney.


I was worried about the lines of questioning I might get in Sydney, and also that they would ask for paperwork proving I had $5000 in my bank account. Prior to getting in the immigration line, I made a trip to the restroom, and this meant I was at the very end of the passport control line. It was a long line...as in, an hour long. Poor Hugh was waiting somewhere on the other side. When I got up to the lady, she took my passport, browsed my customs card, and commented that she hadn't processed anyone from Honolulu in several minutes. She asked how long I'd been waiting and what had delayed me, but in a nice, conversational tone. Then she stamped my passport and sent me through. That was it!! No paperwork, no questions about my visa or my intentions for the next year, no questions about where I'd be living or where I was planning to travel to. Nothing.

Hugh told me they wouldn't care. He said Australia was laid-back. He was right.
Posted by Kusems at 10:28 PM No comments:

I used to have a green wallet from Fossil that I loved. It had a pineapple embroidered into it. It got stolen when I was in Africa, so I replaced it with another green wallet from Fossil. No pineapple on this one, but it has very pretty details that I love, and is lined with a tropical fabric that makes me think of Hawaii. I love it almost as much as my pineapple wallet, but it has one minor flaw. I have to fold my money in half twice to put it in the wallet. I don't mind this, but I woke up one morning and thought to myself:

Australia has plastic money. I don't know how flexible plastic money is. Am I going to have to buy a new wallet? Because that might be a deal breaker!

Hugh set my mind at ease, informing me (with no small amount of derision in his tone) that plastic money folds just like normal money and I won't need to buy a new wallet. Phew! That's a relief.
Posted by Kusems at 2:15 PM 1 comment:

Did you know Granny Smith apples came from Australia? From the area of Sydney, actually. Maria Ann Smith, nicknamed "Granny Smith" (though I haven't yet figured out how she got this nickname; I guess from her grandchildren?) discovered them growing on her estate. They were likely an accidental cross between a European crabapple and a domestic apple. Who knew?
Posted by Kusems at 11:11 AM No comments:

One of things I'm most worried about moving to Australia is my allergies. They've been mild in Seattle until the last couple weeks. They're still pretty manageable, certainly less miserable than they were in Edinburgh. They were also awful in Uganda and I worry I may suffer similarly in Adelaide. Cuz, you know. They're like totally the same. 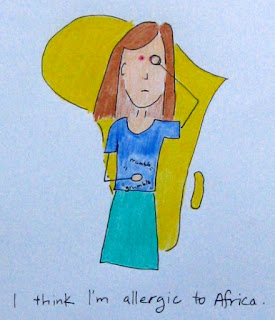 I was discussing allergies with a coworker the other day. At the time, he knew nothing of my plans. The word "Australia" had never been spoken between us when he said, "I didn't think I had allergies until I went to Australia. I'd never experienced them before."

Groan. I did not want to hear that, but oh well. I wonder if you can double or triple-up on allergy meds. Like, could I do an anti-histamine AND a leukocyte blocker? Must look further into this...
Posted by Kusems at 6:16 PM 2 comments:

Hanging out downtown with Sara a month ago, to prepare for my new job... 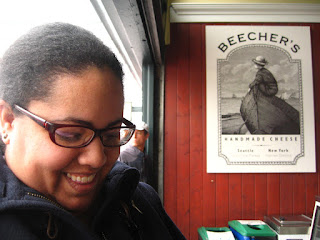 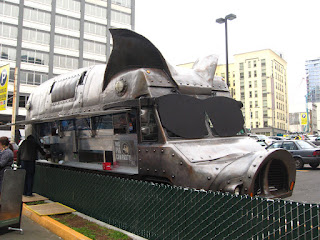 An exciting-looking food cart near the market.
Posted by Kusems at 6:20 PM 1 comment: