A couple months ago, I was telling people that part of the reason I was having trouble finding a job was that I didn't really know what I was looking for. I didn't know quite what I wanted, I just had a general idea. But recently I've come to the realization that it's not true anymore, and probably never was. Over the past couple months, I've formed a solid and tangible idea of the job I want. I can describe it in concrete words.

I want to do qualitative, social research related to tuberculosis, preferably in India.

Hm, surprising how that's exactly how I described my ideal summer project more than a year ago. So if I've wanted to do that for over a year, why did I tell countless people that I didn't know what I wanted? Probably for the same reason that I waited until the end of my third year to declare "microbiology" as my undergraduate major, despite having picked it out of a list of majors during orientation, months before I attended my first undergraduate class. There was never any other major that I considered declaring, yet I hesitated to commit myself to microbiology. Why? Because of a ridiculous, inexplicable lack of confidence in myself or in my choices.

A friend asked me the other day why I wasn't looking for a PhD. This question usually makes me shudder and cringe with the thought of a hundred reasons not to do a PhD, but not this time. This time, I stopped and asked myself, "Yeah, why haven't I considered that?" Suddenly, I couldn't come up with a good reason. I should look into a PhD. Yeah, there may be funding issues, but I won't know until I look into it. I should finish my application to the Peace Corps, too. I should continue emailing researchers doing the work I want to do. When they don't respond, I should call them and nag them. I need to be the squeaky wheel and get myself some gosh-darned grease!
Posted by Kusems at 5:55 AM 8 comments:

Every now and then I fall apart

Last week, I stumbled upon a quote in an old notebook:

This, of course, is way easier said than done. While the quote initially made me nod my head and say "yeah! totally!" to myself, that feeling faded as soon as I tried to work out exactly how to follow my dream. Jobs doing social research on tuberculosis in India don't just grow on trees.

A couple years ago, I was bored and disappointed with my life. So I did two things. I started volunteering with some yutes, and I taught myself to knit. Both made me feel loads better. Now again I'm bored and disappointed with my life. I'm really stressing out again and getting depressed, frustrated with work and lack of money. A couple months ago, I applied to be a volunteer with an HIV support organization, and tonight I had my induction ceremony. When I left the building, I was filled with a sense of, I don't know. Rightness. Maybe it was the warm spring air, the sunset, the fact that that particular part of Islington is gorgeous (near where you lived, Rania!), but I felt like I was making a move in the right direction. I was moving in the direction of my next dream, walking through a city that represented the fulfillment of my last dream.

UK politics, eh? I don't really understand what's going on, but I know it's historical and weird. Also, most British people don't really understand what's going on, so I'm not alone. They don't elect their prime minister the way we elect our president. They vote for how the Houses of Parliament will be structured, and whichever party has a majority in Parliament gets to put their man in 10 Downing Street. But what happens when no party gets a majority? They try to form coalitions (like on Survivor when people formed alliances, but still tried to stab each other in the backs). There were three main parties in this election, the Conservatives (right), Labour (middle/left), and the Liberal Democrats (far-left). And which two parties formed the coalition? The two with the least in common, of course!

So the Conservatives (Tories) formed a coalition with the Lib-Dems, a previously pretty small and weak third party. Now the Tory leader, David Cameron, gets to be PM but the Lib-Dem leader, Nick Clegg, gets to be Deputy PM. From what I understand (and I don't understand much), that's pretty groundbreaking. However, being Deputy PM isn't like being Vice President. They don't get to take over if the Prime Minister dies or anything. PMs don't even have to appoint a deputy. Gordon Brown didn't have a Deputy PM. Still, the Lib-Dems should gain some prestige from this, and it's pretty significant that any third party should gain such power. Like the U.S., Britain has been pretty strongly two-partied for a long time now.

It'll be really interesting to see how things pan out as far as compromises are concerned. For example, on the issue of immigration, the Tories and the Lib-Dems take polar opposite stances. Nick Clegg originally advocated for making all illegal immigrants citizens, while the Tories want to round them all up and deport them. (Well, actually, they wouldn't deport them. They'd just put them in high-security prisons indefinitely with no trial or hopes of ever living a normal life.) So yeah. Fun times ahead for Britain!

On a related but separate note, something I find really interesting and kind of funny: two of the biggest criticisms of Barack Obama in the run-up to the election were that he was 1) an elitist and 2) young and inexperienced. I was all for these things. After 8 years of George W. (and facing the prospect of Sarah Palin as second-in-command), I was ready for someone with a brain to be in power. And as a young person, I'm okay with young people with fresh ideas being in charge. In Britain, the Tories are most like Republicans, and Labour is most like the Democrats. But the people here who love Barack Obama, who support Labour or the Lib-Dems, their big criticisms of Tory leader David Cameron are that he is 1) an elitist and 2) young and inexperienced. Funny how that works, huh? The elitist thing is different here, though. Where Barack Obama was called elitist because he's intelligent and educated, despite humble roots, David Cameron is called an elitist because he's the son of rich, powerful people who sent him to the top (elitist) schools. The class system is way more powerful here than in the U.S., and David Cameron definitely belongs to the snooty upper class.

Ok, enough. I will now return to hating and ignoring politics.
Posted by Kusems at 9:57 PM 2 comments:

Dude, what is with all the spam comments? Ugh. Anyway, I suppose it's about time I updated again. *bored eye roll*

Hm, so...I bought a bike a week and a half ago. It's a piece of junk and I paid way too much for it, but it's a really pretty blue and is one of those curvy beach-cruiser shapes, which I LOVE! Sadly, the seat post seems to be rusted in place so I can't lower the seat to a comfortable height. Alas.

I had a phone interview for an internship in Uganda last week. I didn't do very well. They said they'd let me know by the end of last week but I still haven't heard from them. I think that's a no...

I've been made till specialist at work, which is pretty cool. It means more responsibility for the same amount of pay. And they're not going to be giving me more hours. Hm. Why did I want this again? Oh well, it'll look good on the ol' resume, and I think it'll be kind of fun.

Hm, I feel like there was something else I was going to write about, but now I can't remember. Oh well. Back to job hunting, a.k.a. the most soul-destroying, confidence-shattering activity known to man. 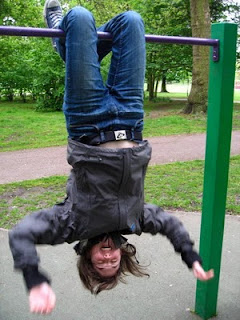 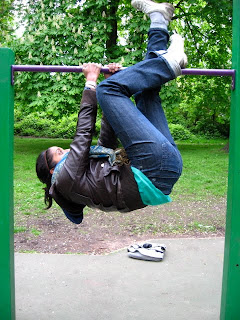 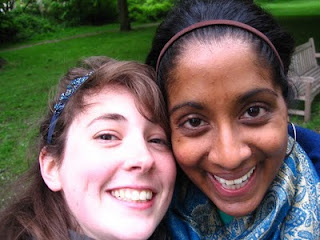