Day 2 in Seattle was the Bachelorette Party. Amy and D decided to forgo tradition (since they're not exactly a traditional couple) and have a combined party. We met Becky, John, Jody, Josh, Jody's friend Kaleigh, and Amy and D at Kushibar for dinner, then headed over en masse to Hula Hula karaoke bar.

I always thought that I could never get drunk enough to be comfortable singing into a microphone in front of other people. I think that's a sign that I grossly underestimate just how drunk I'm capable of getting. I got very drunk at the bach party.

Hugh started us off with two large tiki bowls of cocktails. They were called something like, Zombie Volcano and Zombie Apocalypse. They came with fire in the center and extra long straws. I should have known I'd be trollied before long. (Sorry, photos are awful) 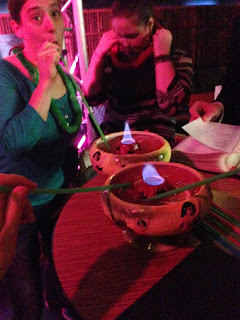 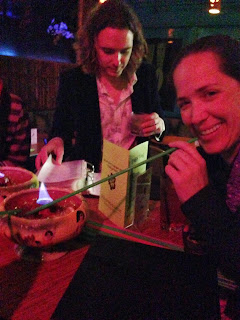 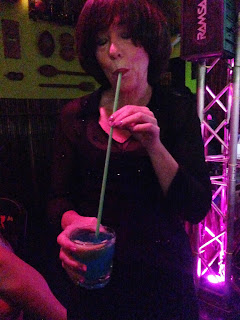 I realised that night that all three of my sisters are stars. My mother and I, however, are far too shy to ever be stars.


I love Diana's face in this one. She is serious about her tiki-dancing! 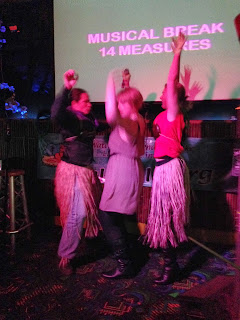 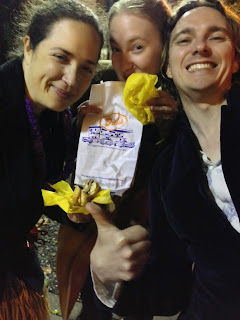 Afterwards, we went for Dick's! Dick's Drive-In is an institution in Seattle. They do a few different types of burgers, fries, and three flavors of milkshake. They are the perfect after-party food.

My mother has kindly posted photos on Facebook which indicate just how wasted I was. I might have done quite a bit of inappropriate dancing on my boyfriend. When he didn't really respond (he was concentrating on keeping me from falling over), I might have started inappropriately dancing with my mother. I'm not really sure, my memory is a bit hazy.
Posted by Kusems at 11:37 AM 2 comments:

on the way to Merica

Hugh asked the night before we left for Seattle whether he would need a visa.

"Nah," I replied. "We're all Schengen states. We don't need visas to travel to each other's countries as tourists."

And he trusted me. Silly boy. 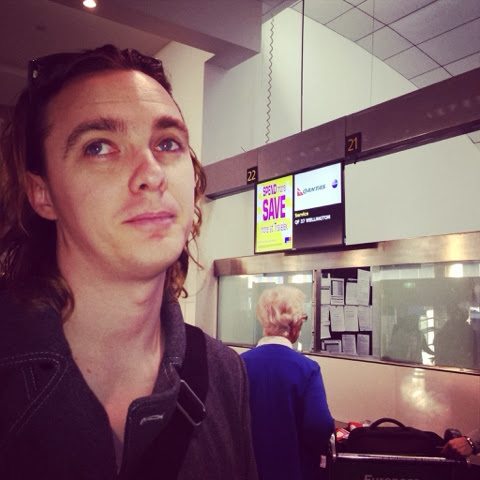 It turns out, I was sort of right. But also very wrong. First of all, the Schengen thing only applies to travel in Europe. Second, Australians don't need a visa to travel to the US. But they do need a visa waiver. "What's a visa waiver?" you ask. It's kinda like a visa. It's something you have to apply for and pay for, and it allows you to travel to the US for 90 days. But get this: it counts both Mexico and Canada as "the US." So if you spent 85 days in Mexico and then tried to spend 10 days in the US, you wouldn't be allowed to. I'm sorry, but since when were Mexico or Canada territories of the United States?

Anyway, luckily, you can apply at the airport and it only costs $14. Good thing we arrived early, though! 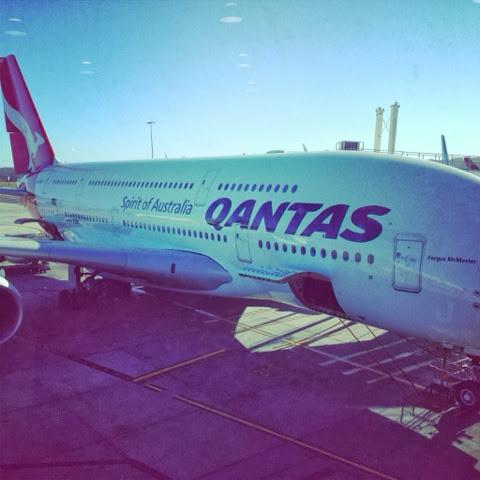 We flew Qantas, which is a pretty great airline if you can afford it. It was my first A380 journey! When I lived across from the Airbus factory in France, I got to see some of the first test flights of the A380s. They seemed to take to the air just fine, but Hugh doesn't like them. He has a fear of flying, and the larger the airplane, the more he worries that it'll fall out of the sky.

To be honest, we couldn't really tell we were on a two-story plane. The cabin felt just like any other airplane cabin (cramped, screaming children, queues for the bathroom). But the food was pretty good quality and the entertainment selection was fantastic. We watched loooots of films.

Our arrival was uneventful, and Mama, Amy, and D picked us up from the airport. It's always wonderful to be welcomed home! We introduced them to some emu and kangaroo jerky we picked up at the airport, and then we went for dinner with Pops and Michele. After dinner, even though we'd been awake for I-don't-know-how-long and the room was starting to shudder and spin around me, we met Mama, Amy, and D for cocktails in a bucket! I just can't resist them. I must find somewhere in Melbourne that serves such a thing...though it's unlikely, because Australia has rules to stop you from overdrinking and having fun. 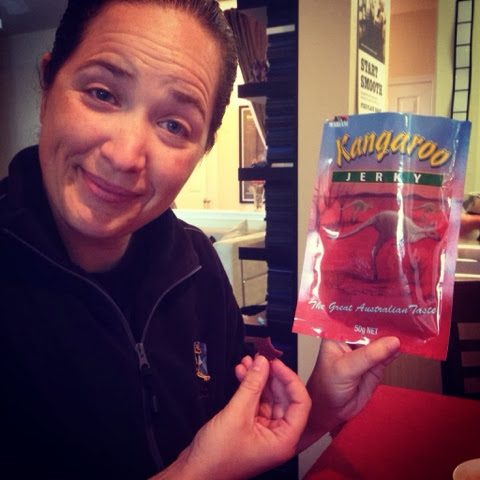 I've been feeling a bit bad. When we were in Seattle, several people asked me if I was enjoying Australia or if I liked it or if I'd be staying here forever. And my response, every time, was lukewarm at best. Hugh, who was standing right next to me every time, felt a bit miffed. At one point, he apologised for taking me away from Seattle, even though I picked Australia and I've made it clear that I don't want to be in Seattle.

I've been trying to figure out why my responses weren't more enthusiastic, and I think it's a combination of factors. The main one is probably that, because I live here, Australia has become everyday. It's not mundane, exactly, but it's not hugely dissimilar to life in the US.

Anyway, why is beside the point. On the plane ride home (to Melbourne), I watched a film about an Aboriginal boy, called Satellite Boy, which was really sweet, and I also watched several episodes of a show I hadn't heard of before, called Upper Middle Bogan. It was really funny! The two portray polar opposites of Australian lifestyles, but it reminded that I do really enjoy this diverse culture, even the bits of it that are criticised for lacking culture (a "bogan" is comparable to a redneck). This is a fun place to be. And Melbourne is a beautiful place to be. And a sunny place. I like that a lot.

A customer yesterday, an international student from China, told my colleague that she didn't really like Australia, that she thinks she should have gone to America, because everyone in Australia is too laid-back and the Americans are more serious about business. Lol! I'll stick with Australia, and maybe someday some of their relaxed nature will rub off on me. Maybe. 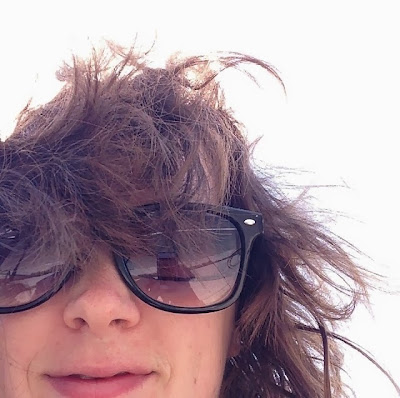 We were in America!! And now we're not!
We went to bed at 8:30pm last night and slept soundly until 7:30am. We tried to last until at least 9pm, but I very suddenly found it impossible to be awake. I lay down on the couch and fell asleep, which Hugh took as a sign that it was bedtime, but in my fitful half-asleep state, I refused to get up and go to bed properly.
So let's figure out how long we were awake! We woke up at 9am Seattle time on Friday. We caught our plane from Los Angeles to Melbourne at 11:30pm. That's 14.5 hours of being awake.
The flight was roughly 16 hours long, for a current total of 30.5 hours. (We slept a bit on the plane, but it's such poor quality and so brief that I wouldn't count it as sleeping.)
When we landed in Melbourne, it was 9:30am. We were good and stayed up all day without napping, until I totally crashed at 8:30. So that adds 11 hours to our total, for 41.5 total hours awake! No wonder I was not a very happy Kusems! I'm amazed I even managed to stay up that long. It didn't really feel like that long, but I guess sleeping on the plane helped.
I feel great so far today, but we'll have to see how jet lag affects us this week. Wish us luck!
Posted by Kusems at 8:14 AM 1 comment: