Good day, today. First, I got an emissions test. My car totally passed, but I hadn't even entertained the possibility that it wouldn't. Please. Then I went to Joann's to buy some knitting needles. Normally, I buy the cheaper, inferior metal ones, but I decide to splurge on a bamboo pair ($6 versus $9). I also grabbed some $1 junk from the "impulse buy" bins at the front, so I was surprised when the woman said my total was a little over $6. Needles on sale! Sweet!

Then Sara and I went to Bell Square, cuz I've decided I need a pair of glasses as back-up, in case I have to immediately evacuate my apartment at night after I've taken my contacts out. You know, cuz I'm almost legally blind. At the mall, I just wanted to see what kinds of options I had. Seeing as how my prescription is so high, I have limited options for glasses. I have to get small ones so the lenses will be smaller (keeps 'em thin), which is fine because I have a small face and small glasses look best on me. I also need to get some with a thick frame that goes all the way around the lens so it'll mask the thickness of the lens. This limits me mostly to thick plastic type frames, which is fine cuz those are "so hot right now," and I like 'em!

We went to three stores, and I found two pairs I really like. They're almost exactly the same, both a dark reddish color (!) which I totally didn't think would be me, but it totally is. I'm really excited about them! One pair was $100 and the other was $430 (that's just for the frames). I still plan to shop around more, though.

Anyway, enough of the boring stuff; after that, we went to see "Forgetting Sarah Marshall" which has a really funny British comedian named Russell Brand whom Sara and I love. It also stars Kristen Bell, and I heart her. Still, I wasn't sure I'd like it, because all the previews seemed pretty lackluster (though reviews were good), but it was very funny, and also very good! I don't know how to word this properly, but it wasn't just a stupid, boy-joke movie. It was quite grown-up; there weren't any stupid gags or fart jokes or anything (though there was lots of sex and some full-frontal male nudity). So, thumbs up! For the movie, not for the male nudity.

AND THEN, on the way back to the car, I found a dollar lying on the sidewalk! My lucky day!

Here is a Russell Brand banner that Sara made (because she's insanely talented):

Isn't he pretty? He's quite self-obsessed, but in a sweet, endearing way. He's also a sex addict and former drug addict. He combs the back of his head into a bird's nest, intentionally (and inexplicably). In the movie, he basically plays himself, but with a different name. If you like listening to British people talk about random things for an hour in fun accents, you should check out the podcasts of his radio show on iTunes. He has regular features such as "GAY!", in which he gives advice on gay matters (though he's not himself gay), and "Nanecdotes," wherein readers send in anecdotes about their grandmothers. He also frequently telephones his good friend Noel Gallagher (of Oasis), whom he refers to as a crusty, washed-up, old rocker. It's great fun!

I shall leave you with (mediocre) pictures of the headband that knit myself in one day, and of which I am intensely proud. I think I look adorable in it. The second photo is the more accurate color. It's tweed! Yay! 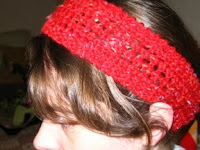 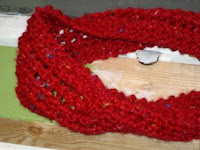 I really want to watch "Doctor Who," and Sara very sweetly loaned me series 2 and 3 for my b-day, but I'm the biggest wuss in the world and can't watch it alone. I'm totally pathetic! I watched three episodes one night and was all spooked out afterwards. The following night, I decided to limit myself to just one episode, and I'm ashamed of how poorly it went.

I started out watching it from my armchair, about three feet away from the TV. Early on, I was getting too freaked out (the episode was about the devil/Beast being awakened; fun!), so I decided to move to my bed, where my back would be firmly against the wall. This position is roughly 11 feet away from the TV. I also turned on all the lights in my apartment. And I was eating dinner, so was slightly distracted.

I'm 26 years old, and this show is designed for children to be able to watch. And I watched much of it through my fingers. I literally held my hand in front of my eyes with the fingers only slightly splayed. It's ABSURD!!! The show is so campy cheesy, and whenever they're gonna do something scary, they give you ample warning, what with music and stuff. There is no way to be surprised by this show. And still, I had to watch it through my fingers, 11 feet away from the TV, with all the lights on. I even tried turning the volume down low.

But looking at pictures like this make me really want to pop it in:

For my birthday party last week (of which I didn't snap a single photo!), I wanted to make peanut butter cookies. EPIC FAIL!!

This is what I get for trying to follow a recipe on the back of an Anthropologie glass: 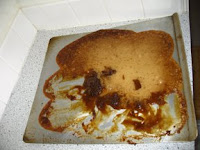 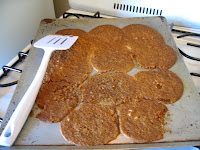 I added a little more flour for second bath. It didn't help much.
In case you can't tell, they're completely flat.
Posted by Kusems at 9:57 AM 2 comments:

Ah, Easter. Wonderful in so many ways. Spring has arrived, Christ has risen from the dead, good times all around. Sadly, there was no shaping-of-butter-into-lamb this year, but there was still some good ol' fashioned fun to be had.

First, welcoming the early blossoms in the Quad: 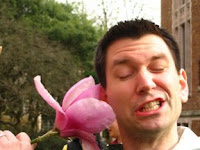 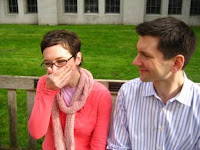 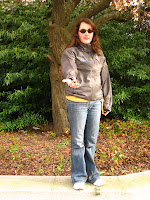 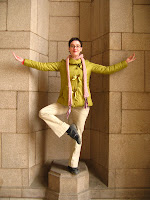 Second, Easter egg painting! I haven't done this since I was kid! John is amazing! 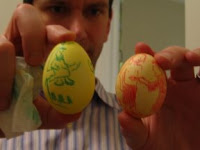 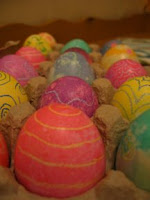 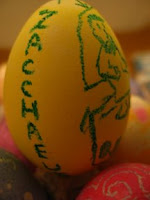 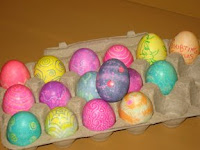 Pretty, pretty, such a pretty 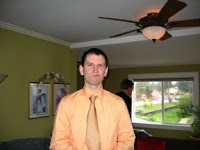 Don't know what his deal is 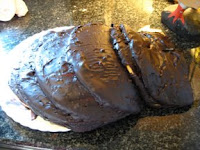 Michele is an excellent cook.
This could've happened to anyone.
(It tasted good all the same.)
Definitely makes me feel better about my Epic Fail cookies (see NEXT post)
Posted by Kusems at 10:05 AM 1 comment: