Oooh, I am feelin' good. Becky just gave me an old pair of shoes, and even though they are old, and too big, and slippery on the ground, and a bit démodé, I am feeling the freebie high. I loves me some freebies. Woot woot! Plus, they feel fun to wear, almost like tap shoes cuz they are noisy. Clip clop clop.


Also, I get free (yummy) dinner tonight, cooked NOT by me! Yippee! AND!!! It snowed last night, and it's supposed to snow more tonight! And I didn't have to pay for that, either! Life is gooooood.

Finally, a meal I know how to cook and I know will taste delicious: Top Ramen! I'm such a college student. Which is to be expected, I suppose, since I lived at home all through college. I'm finally on my ownsies, so now is the time to learn. Of course, I could have picked up skills on my many travels abroad, or while I was living with Jacque (who's never home). But now I have my own little kitchen, and it's oh-so-adorable, and I want to make it feel loved, so I'll have to actually use it.

I tried baking a couple times, and that was WAY FUN! so I'll have to do it some more. Only problem is, I don't like carbs (bread or sugar), so someone else will have to eat all my baked goods. Any takers?

So, Sarah is in town, and even though she grew up here, she wanted to do something touristy while here (which makes total sense; I want to do touristy things and I still live here!) So we all bundled up and headed to Pioneer Square. We briefly browsed Elliot Bay Book Company (way cool, but nowhere near as cool as Powell's in Portland), ate lunch at someplace cool, 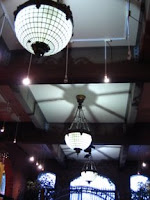 played at a toy store, 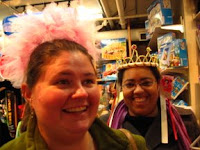 got ice cream and sweets from Rocky Mtn Chocolate Co., 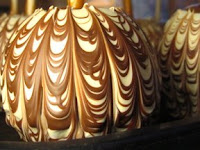 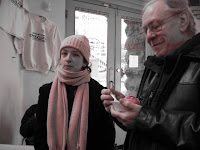 and went on the Seattle Underground Tour! 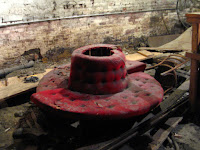 Now, I knew Seattle was built on a marshy, mud-flat. And I knew it burned to the ground long, long ago. 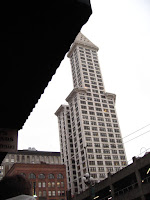 But I heard that they just rebuilt the city on top of the ashen ruins, and that's how you got the Underground. But no, they actually planned for stuff to be underground. Or something bizarre like that.

They didn't really have money to rebuild their nice hotels (aka brothels) with fancy ground floors, and they had a sewage problem (as in, lack of plumbing). 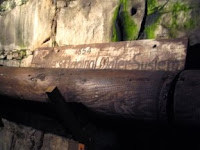 So they brilliantly (and I'm using that word sarcastically) decided to build sewers above ground, and pave over the top and sides, making the road. The buildings (hotels, brothels, etc) would then have their first floors facing this concrete structure. The sidewalks were likewise on ground level, for a few years. Smart, huh? That way, the hotels/brothels could spend less on the first floor, earn some more cash, then build the second floor as the main, fancy entrance. And then the sidewalks would be encased in cement, too, and there would be a sidewalk level with the road and the second floors of hotels, and a sidewalk below ground, next to the cement holding all the sewage and the new basement floors of the buildings (lit by these purple skylights.) 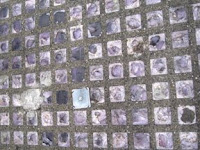 History is so much more interesting when people are dumb or bizarre! And now, we have a bunch of derelict underground alleys that are used for making loads of money off tourists! (Seriously, fourteen dollars a person??)

Anyway, it was WAY fun. And then I hopped in my car in the evening, and drove to Bellingham to visit my favorite second-youngest sister. On Sunday, I forced her to go to this bizarre science museum-type place called, "Mindport." Any place called "Mindport" deserves a look-see.
It was awesomness! We could only stay for half an hour, so it's a good thing it only cost $2.

And that's all I have to say. There are more pictures, of which I am quite proud, here. Look at them. That's not a request.
Posted by Kusems at 4:07 PM 3 comments:

Here are photos of fun being had: 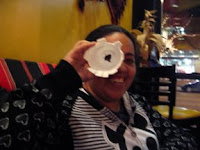 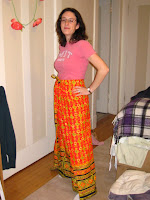 Sarah
These pants are a legacy. Sara, Emily and I found them at Value Village on Halloween, 2006, and now everyone has to be photographed in them. Unfortunately, Rania and Ben didn't get to pose in them while they were here over Christmas break. (Compare with photo from 2006.)

Also, some photos of my NEW APARTMENT! YAY! By the way, I LOVE it! It's just the right size for me, and oh-so-charming. I'm slowly decorating it (taking my time cuz I don't have much decorating sense), and it's starting to come together. 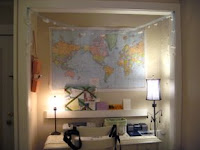 Can I just say that, although I LOVE maps, especially colorful ones, I sorta hate this one. Like many makers of American map, Rand McNally has cut Eurasia IN HALF in order to place America where it belongs, at the center of the world. Wrong! A child could get seriously confused from this map, as it appears that there are two China's, two India's, two Kazakhstan's, etc. (perhaps most alarmingly, two Afghanistans. Does that mean we'll need twice as many soldiers fighting in the war there?) But I think the seriously-faulted map still adds a nice element to the room. 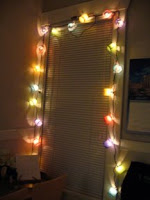 Pretty lights in the kitchen! Yay!
Posted by Kusems at 4:12 AM No comments:

In continuing efforts to save money, or perhaps because of sheer laziness, I again decided to forgo following an actual recipe, or even following good sense.

I have spaghetti. Might as well save money and use it.

I will buy ground Italian sausage for my spaghetti. Yum yum!

Oh, merde, I have forgotten to buy red sauce for my spaghetti and sausage.

Hm, well, I have this sour cream, and sour cream is oh-so-yummy. Plus, the sausage will be slightly spicy, so cream will offset it!


Aren't I brilliant? Except for the part where I burned some of the spaghetti. And then overcooked the spaghetti. Other than that, it went pretty well. And guess what? It's actually tasty!! (though sour cream on spaghetti is a bit weird) I'm so pleased with myself!

Ah, sour cream, my love! Snacks, entrees, desserts; is there anything you can't do?
Posted by Kusems at 2:35 PM 3 comments:

Tonight on "In the Kitchen with Kusems," Kusems accidentally invents a new couscous dish:

Cook frozen artichoke bits on stove-top. Drain, and add extremely mushy couscous. Warm over medium heat in vain attempt to get rid of some of the water. Realize how dumb that is, and that you're actually accomplishing the opposite. Add 1/4 tsp ground ginger, 1/4 tsp cinnamon, and 1/4 tsp nutmeg. Continue to heat, making couscous ever mushier until it is the consistency of cornmeal, oatmeal, or malt-o-meal. Decide that couscousmeal might not be so bad. Serve in festive bowl! 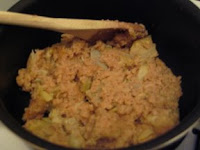 Actually tastes like oatmeal, but with random artichoke bits. Next time, leave out artichoke and add more cinnamon. Or perhaps cook couscous properly, so it's normal, but mix spices in beforehand, when it's still dry.

Oh, well. It's nourishment. It's a fair balance to the combined six strips of bacon that I ate for breakfast and lunch, plus two more strips in last night's delicious BLTA croissants (by John). Plus, I had scrumptious Dick's burgers (and fries! swoon!) on Saturday night. I'm sure if I had tried to eat anything tasty for dinner tonight, my tongue would have overloaded from all the concentrated yummy-ness. Gotta be careful to avoid that!

Still, I'm not entirely sure what's wrong with my brain that made me think this would be a good idea. And why can't I plan ahead so I'm not still deciding what to eat at 7pm and then I don't have time to go to the grocery store before my body goes into starvation mode? And why does it do that so readily, anyway? I'm petite, but there's enough fat on my body to last a couple days at least! And it's even located on my stomach, so my stomach can't complain that it has to travel too far to utilize that fat. Sheesh. 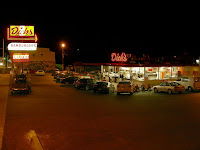 Mmm, what a lovely, lazy Sunday. I slept in way too late, and now I'm lounging around in my pj's reading magazines (you rock, Becky) and discovering AMAZING things on the internet.

Back story: I tried to find cute recipe cards for a gift for a friend, and I looked ALL over U-Village. I started at Williams-Sonoma, an upscale cooking store.

"No, we don't have them. You could get index cards from Office Depot."

Index cards?! Does she really think that Williams-Sonoma customers would settle for index cards in place of recipe cards?

I next went to Crate and Barrel, a home store that has a large kitchen section. They recommended I go to Williams-Sonoma. I tried a few other, non-cooking stores, including Barnes and Noble, then went to a smaller cooking store. Finally, someone with recipes cards. Except that they were the most boring recipe cards possible! Argh!! Do people not write out recipes anymore? I consulted Martha Stewart (dotcom), and she told me to print my own! Even Martha couldn't recommend a place to get cute recipe cards.

In the end, I went with some cheery, red index cards (le sigh), embellished by me with some sticker borders (which were also surprisingly hard to find! Am I just clueless? Actually, I know the answer to that question is "yes.")

But I just did a search for recipe cards (well, a few searches), and the almighty Internets have smiled upon me this once, and blessed me with this and this: 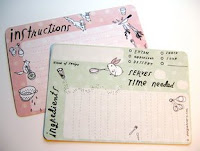 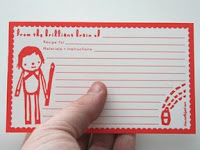 And of course, now I'm very upset that I don't have enough money to buy all the amazing, adorable things in the world that I want.

Yeah, I could use some of that: Focus Necklace, by Made With Molecules.

Why, WHY hasn't anyone made a good DNA necklace or bracelet? Double helix or molecular? Is DNA just too commercial? You know, you can buy paternity tests at RiteAid now. The commercial for it is appalling and tragic. A woman talks about how she and her husband have piece of mind. Piece of mind? You're not upset about the fact that your husband couldn't trust you enough to believe the child was his? Or perhaps I have it wrong. Perhaps you slept around, and you weren't sure who the father was, and your husband knew. So now he's happy to know the child is his and can forget that you slept with someone else??

But yeah, they should totally make a DNA necklace.