Hugh had an interview in Melbourne, and since I've never been there and haven't really been out of Adelaide since arriving last July, we decided to take a few days to explore. After Hugh booked the hotel, I turned to him and said, "We're not staying at the Hilton, are we?"

Of course we are.

We didn't fly first class this time, but Qantas is pretty awesome so it was a nice flight. Also, it was only about 45min long, so not much room for complaints. We flew over Sunday night after Hugh got home from work. 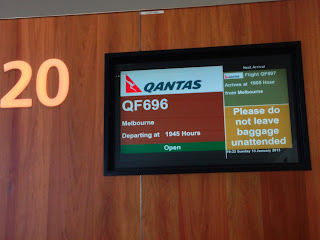 I awoke at dawn Monday morning, and this was the view that greeted me. Four hot air balloons had just taken off from somewhere in the city. I was entirely charmed. 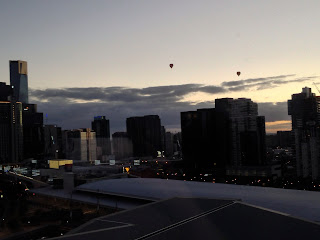 The first thing that struck me was the thought that I was in a city. That's an odd thought to have, when you've already been living in a city. But it made Adelaide look like Grand Junction. Actually, I'm not entirely sure Adelaide is much different in size from Grand Junction. Anyway, it dwarfed Adelaide. Turns out, it's at least twice as big as Seattle, even! It was nice and clearly wealthy.


While Hugh had his interview, I used my fancy new iPhone to video chat with Holly in London. We had a nice long chat and I caught up on all the gossip (there were some juicy bits!) Then I headed into town to meet Hugh and grab some breakfast. I discovered a cool-looking cafe called the Journal cafe, next to the city library. It was very industrial-chic, with bookshelves suspended over the long tables.

Then we went shopping. According to all of the Adelaideans I spoke to, this is the only real reason one goes to Melbourne. Apparently, shopping in Adelaide has traditionally been a pretty grim affair and big chains have only recently colonised the city. All's I know is that the shopping has been totally fine here for as long as I've been here. I don't really feel like I'm missing out on anything. They just opened a Kmart, for heaven's sake! And anyway, all the stores we went into in Melbourne were ones that exist in Adelaide. *shrug*

But that's not to say I didn't buy anything. 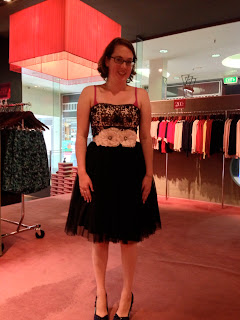 Yes, this is rather an awkward photo, but the dress was perdy, and I need something for Amy's wedding in October, so...it's MINE, all MINE! We also checked out a really nice yarn store that was smack dab in the middle of the city. Imagine that! A yarn store that you don't have to take two buses to get to, only to find that it closes at noon on Saturdays and isn't open at all on Sundays! Or like the one in the northern suburbs of Adelaide that is only open on Saturdays. Anyhoo...

For dinner, we went to a fun-looking restaurant on the riverfront near our hotel. It was called Merrywell, and they had some very exciting things on the menu. There were onion rings, loaded fries, burgers, shakes, macaroni bites (!), and other American classics.

On Tuesday, we had breakfast at The Pancake Parlour, a wonderfully cheesy pancake house with an 1890s theme. I had the cheese and potato pancake. I don't think I need to say anything more about that. Cheese. And potato.

Then we walked to the Queen Victoria Market, Melbourne's open-air food market. I liked the sort of art deco booths for the dairy vendors. 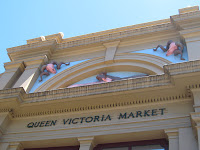 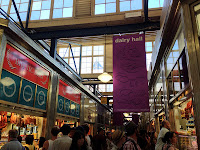 I think I'll leave this post at that and write the rest in another one!

Oh yeah, also, I had a job interview today (in Adelaide) that I think went pretty well. But I kinda don't care because we're moving to Melbourne. Is that wrong? I mean, it's a job I'm qualified for but not really my passion. So no, it isn't wrong. It's fine.
Posted by Kusems at 12:07 AM No comments:

There is so much to say and I have no idea where to begin.

Hm, well. My job at Flinders University ended in mid-December, but my boss liked me so much that she found some funding on another research project for me to continue working there until my visa limit runs out. The plan was to come back in late January, early February.

Then Hugh heard that he had a job interview in Melbourne in mid January, and if he got that job, we might need to move fairly quickly.

Then my boss asked me to move the work up to be done throughout January. As my retail job hadn't given me many January shifts, I was happy to get the work done in January. So I started back last week, working four days. Then the retail job called to offer me an extra shift and to let me know that they would like me to stay with them indefinitely! (I was a Christmas temp) They want to train me to work at their department store concession as well, and so some discussion started to try to arrange time for training. We were in Melbourne for three days this week (pictures in the next post, I think) so I need to make up for the time missed from Flinders, but the retail job wants me too! I'm just too much in demand and suddenly feeling quite busy!

Which is all very exciting, but Hugh found out today...He got the job in Melbourne!!! Woot woot, we're moving to Melbourne! We don't know when yet, but it's unlikely to be before February. At any rate, if he needs to rush over there, I can take my time, finish things up here, and then head over. Em got a job as a teacher in the country, so she moved out this past week, leaving us with her hilarious and rather energetic boyfriend. Our lease goes until July, so he'll probably take that over. He just got a good government job, and he's toying with the idea of keeping the flat all to himself once we're gone.

I think the best part about this news is not being held in suspense anymore! At least mentally, I've been putting things off until we knew. Like, Hugh suggested that we take sewing lessons together (isn't that adorable??) but I didn't want to start anything until we knew.

So yeah. Details forthcoming, I suppose.
Posted by Kusems at 9:17 PM 1 comment:

I got a wonderful box of treats from Becky and John yesterday.

It got a bit crunched on the post, but nothing was fragile. There was a very funny article about taxidermy owls from David Sedaris, a copy of The Stanger from when President Obama was re-elected, a pin cushion like my mom had when I was kid, some wool I ordered in July that was sent to the wrong address, a skirt and a handbag.

Now here's the cool thing. The skirt and handbag were both up-cycled. Years ago, I had a pair of jeans with cool swirly details on the back pockets. Come to think of it, I bought them secondhand. I used to wear jeans 6 days out of 7, so eventually, I wore holes in the crotch of these ones. I wanted to up-cycle them but lacked any sewing skills, so I left them in storage for 4 years while I lived in the UK. This past spring, I passed them to Becky, and she turned them into a great jean skirt that fits me perfectly!

When I opened the handbag, I noticed the Ann Taylor Loft tag and assumed Becky had bought this gift. It is beautiful and big, which is perfect because I carry a LOT of crap around. But later, I went back to look at it again, and realised it had previously been an Ann Taylor skirt and Becky had worked her magic on it. Then I realised it was an old skirt of mine, one that I had loved but got too chubby for. I had forgotten this skirt ever existed, but now it's like having an old friend back in my life. Up-cycling makes you feel good! Thank you, John and Becky! I love it all! 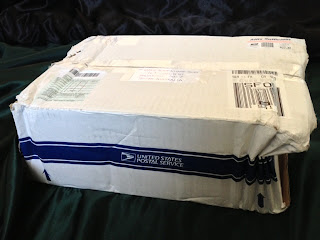 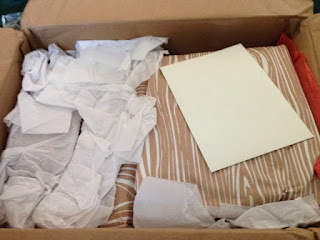 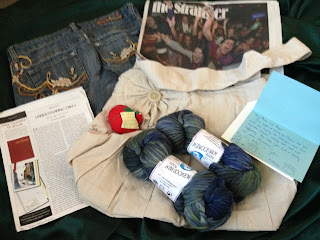 Posted by Kusems at 8:12 PM No comments:

We went body boarding again yesterday. We went all the way down to Victor Harbour, to a spot called Chiton Rocks (watch out for the large rocks hiding below the surface in some spots!) It was not as calm as the last time, but the waves weren't great for riding. I did catch a couple good ones, though, one which I rode straight in to shore, and another in which I finally managed to ride sort of parallel with the wave (I forget what Hugh told me that's called). So far, I've focused more on staying on my board and on the wave than I have focused on actually manoeuvring along the wave. I have not yet learned to become one with the board. 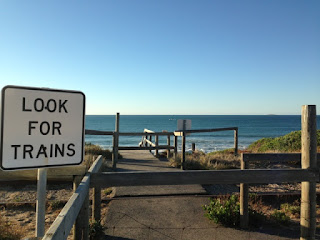 I also haven't learned to become one with the water, and I got smashed by waves more than a couple times. I quickly learned to always face away from shore, and to plug my nose and drop into the water when a big scary wave caught me unprepared. With the choppier and deeper water on this go, it became apparent that I needed some flippers, so we stopped at the good surf shop in Glenelg on the way home and picked some up. Now a just need my own board, in a pretty color, of course! 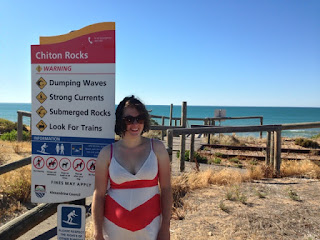 We also grabbed some tasty treats from Port Elliot bakery, which Hugh displayed down the front of his shirt. 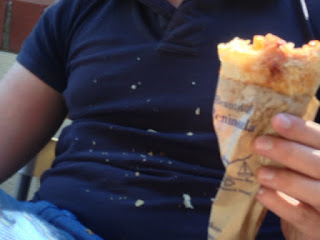 I got a rubber-banded packet of mail yesterday, as if the post office was saving it all up in order to deliver it all in one go! There were lots of lovely goodies: a Christmas card from Jocky, a gorgeous, sparkly vellum letter from Mama with card-making stickers, a funny photo letter from Ralph and Wanda, and some organic cotton yarn from Jody! Today, I got Sarah and Brian's annual family newsletter and a card from Aunt Chris. Love it! 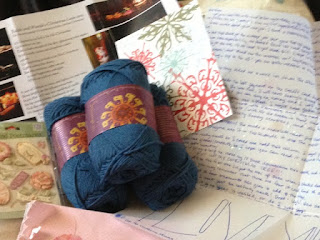 I finally tackled my sewing machine this month, in order to make the saddest-looking Christmas gift ever. I bought a kit, and all I had to do was cut around the dashed lines and sew two pieces of fabric together, then stuff it with the included stuffing (made from recycled plastic bottles!) 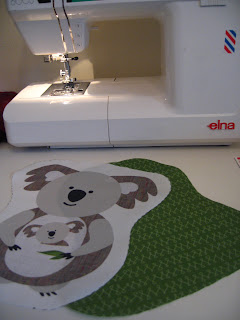 Since I've never been able to do anything in a straight line, I was slightly encouraged by the wavy shape of the animal. But it appears that it is not the straightness of the line that is my problem, but the existence of a line at all! As you can see, her ears are not quite smooth. I totally clipped one of them. Anyhoo, I think she is still cute in her quirkiness and I hope Kasia and Corrado's itty bitty new baby likes her. 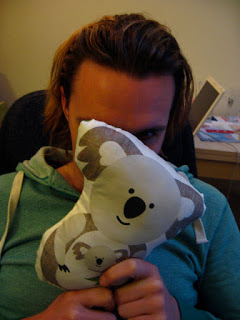