I think I've mentioned before, I wrote my handsome a letter and I'm SUPER pleased with the way it turned out. I used a (free!) Powell's Books store map that I picked up while in Portland with Emily and Sara. The map is really cool to begin with, so I didn't want to cover over it with opaque paper to write the letter. I was looking around my room for a solution when I noticed that I had some white tissue paper from a clothing purchase I made. I glue-stick'd them down in a sort of checkerboard pattern, and voila! Perfect! It let the cool illustrations come through while still showing all my silly thoughts on paper. 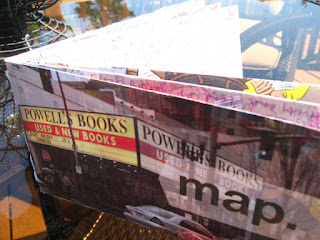 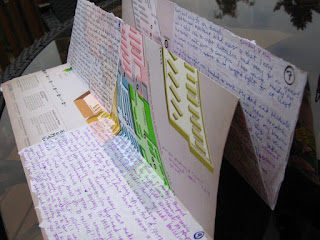 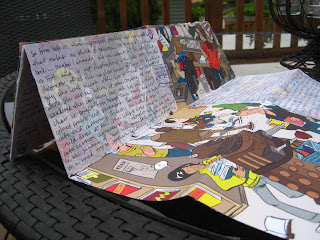 I also finally figured out an envelope for Aparna's Portland-themed letter, shown earlier. Again, I used a map, again from Portland, and again free! I taped it shut with electrical tape from my dad's tool closet which happened to match the color scheme of the map. 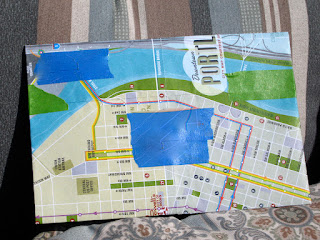 Posted by Kusems at 6:11 PM No comments:

I am SO frustrated! Having a $74,000 student loan debt hanging over your head sucks, but having the company that holds it over your head be completely inadequate and useless REALLY sucks. Especially when it's a company run by the U.S. government.

Direct Loans has been processing my income-based repayment paperwork for seven months. Meanwhile, they've been sending me bills each month that say I owe $800 each month. When I called them in March to check the status of my paperwork, they said to just send new income documentation. So I did. I kept checking back on my online account, and nothing changed, so I called them today (since my next $800 payment is due on Monday). Apparently, they never received my second set of paperwork.

I can send my vulnerable, financial details (complete with social security number and date of birth), again. So that they can either a) say they never received it, or b) acknowledge that they've received it, but fail to process it even six months later.

Well, that's it. After a week of checking Kayak.com every day, drawing price and city matrices, calculating extra baggage costs, and generally turning my brain into mush, I had an epiphany today.

I'd looked at Seattle-Sydney, Vancouver-Sydney, L.A.-Sydney, Seattle-Melbourne, Seattle-Brisbane, Vancouver-Melbourne, Vancouver-Brisbane, L.A.-Melbourne, and L.A.-Brisbane. I'd looked at layovers in L.A., San Francisco, Honolulu, Seoul, Shanghai, Guangzhou, Auckland, and Fiji. I didn't like the idea of flying directly west to Asia, then south. Going along the hypotenuse of that triangle (i.e. Hawaii or Auckland) would obviously be preferable and shorten the time in the air. But nothing quite fit the dates I needed or the price I was willing to pay or the length of time I wanted to spend traveling.

And then it hit me: I need to visit family in the Portland area before I leave...why not fly out of Portland? Because it's a smaller city, with less flights, and will therefore be more expensive. Right? Wrong. I found a decently priced flight, on a good day to fly, that has only one stop, in HONOLULU (yes!!) AND....it's an overnight layover! I could spend the night in a hotel in Waikiki!

So I booked it. That's it. I have a plane ticket to Australia.

And having purchased that, I really shouldn't be spending any money. I should be saving money for life in Oz. But I really think I MUST own this dress, and it's so cheap! 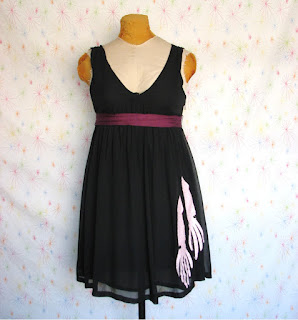 Posted by Kusems at 4:01 PM No comments:

These pics are from back in mid-April, when Sara, Emily, and I took a fun little day trip to Skagit Valley for the annual Tulip Festival.

Anyway, turns out, EVERYBODY KNOWS the tulips don't bloom until the third week of April. Everybody except me, Emily, and Sara. All we saw were fields and fields of dirt. With a few fields of yellow daffodils here and there.

I'm gonna go ahead and say something controversial: daffodils are boring. They do nothing for me. Emily feels the same way and we spent the better part of an hour driving down every small road in Skagit Valley, venomously cursing daffodils. Eventually, we found ONE field with what was SOON to be, but not quite YET, tulips. 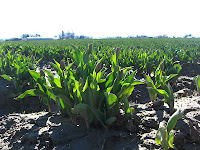 So we improvised. We drove to La Connor and found The Scone Lady. I think I had a blueberry cream cheese one. Yum yum yum! Then we took the scenic route to Mt. Baker. Why not, eh?


Things just got sillier from there. Yes, there were icicle shenanigans. Emily fell into a snow drift and almost lost a flip-flop. 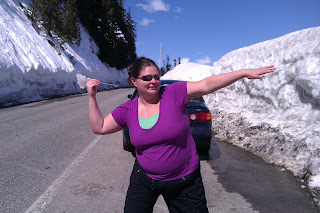 All in all, a fantastic day out. 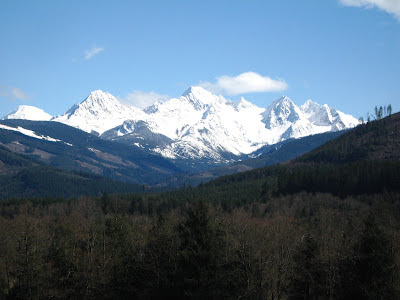 Posted by Kusems at 4:21 PM No comments:

Oh, and I made these in April. I didn't like the first one, because I increased too many times and the top is all floppy and doesn't hug the cup. So I made a second one following the same pattern, but I only increased once and it's much better. (Those are my 6 month-iversary roses in the background.) 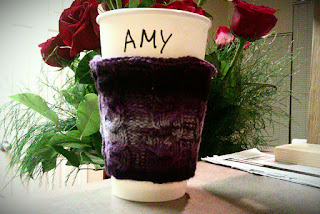 The above one was a bit too big on top and a bit too small on bottom. But the one below is much better fitted and I'm very pleased with it! 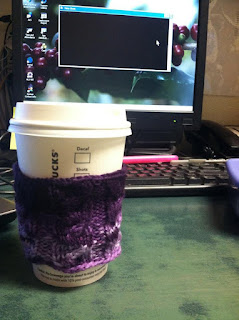 I've been meaning to write more letters (only for the past 10 years or so...), and I like to buy cute stationary to inspire me, but it doesn't really work. I spend lots of money on pretty paper sets, and then I write one letter with each set. I've always wanted to make more interesting mail, and I found a book the other day which I thought would help me do just that. I was wrong. It was a kind of annoying book more about mail artists than about crafting. These people create unique pieces of art out of random garbage they collect off the streets, or stamps that they make themselves, and then they mail them to each other. But they don't write letters. They don't write anything, except meaningless strings of words that sound artsy. And then they published a book about their art. Needless to say, it was a letdown, but it still inspired me. I collected some free supplies, like maps and, yes, scraps of garbage, and some cheap supplies, like a children's book from the 1950s from Powell's for $1, or a paperback copy of The Wizard of Oz from Target for $1. And now I'm starting to venture into the world of mail art, but my mail will actually have a point. So, here is Project Number 1: a letter/book for Aparna! 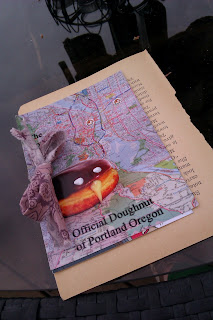 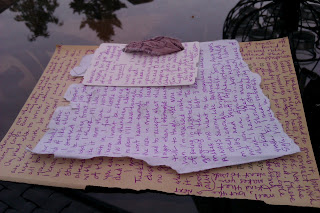 I'm currently working on Project Number 2, which I'm already really pleased with. Photos soooon!
Posted by Kusems at 10:18 AM No comments:

So, I did something kinda stupid...

So, yesterday, I decided to try applying for an Australian visa. It was a very foolish thing to have done, as I wasn't exactly prepared, but I'd read that some people got theirs back really quickly. I decided to just give it a try, and didn't really remember until the payment page that it would cost me $270 for this "whim." Of course, afterward, my stomach started tying itself in knots realizing what a dumb thing I'd done.

But at 2am this morning (Seattle time), they sent me an email saying my application was approved. I have been granted a one-year visa to enter Australian. I have 12 months to enter the country, then will have 12 months to stay in the country from that point. I kind of don't know how to feel about it, since I really wasn't prepared for it. I just started a new job that I really like, and I'm cringing at the thought of telling them, "Thanks for training me! I'm gonna take this knowledge somewhere else now!" But tickets are significantly cheaper if I fly in early June, and besides, I miss my man!! Sigh, decisions, decisions.
Posted by Kusems at 10:32 AM 5 comments: