Received Mail: Save the Date

Yays! I'm ridiculously excited for this wedding. I adore my sister, I adore her chosen spouse, I get to take my boyfriend home to meet the family, and I get to wear a hat! The color scheme is white, black, gray, and purple, like the Royal Ascot scene in My Fair Lady, and I can't wait to start shopping for a dress. This wedding's gonna be OFF THE HOOK! 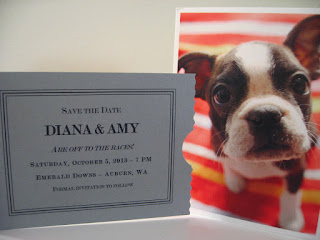 Amy, Diana, Becky, and John made the cards themselves using an assembly line. LOLs.

The puppy card is from Jody. I've received three lovely letters from her in the past couple weeks. I love mail! And this puppy is so cute. He actually reminds me of Jody when she was little. I think there's a picture of her somewhere where she's looking up at the photographer with that exact, quizzicle look.
Posted by Kusems at 1:00 PM 2 comments:

Guess what?! Bodyboarding is so much fun! The waves were itty bitty, but I caught a couple good ones thanks to my wonderful teacher. Mostly, I just enjoyed being in the water on a gorgeous morning. It was totally like a Qantas ad. I could definitely get used to this. Dear Family, I may never come home again.

The other day, I used the phrase "damn skippy," as in "damn straight," and Hugh thought I was making up Australian slang. Apparently, "skippy" is a word that is very, very occasionally used to refer to a kangaroo, and he thought I was swearing at a kangaroo. LOL! Separated by a common language.

While we're on the topic of language, I offered some mushrooms and peppers to Em's boyfriend today, and he responded, "Thanks! But if you say 'peppers' instead of 'capsicums' in public, they might revoke your visa." Capsicums. Silly Aussies.
Posted by Kusems at 5:15 PM 2 comments:

But who am I kidding? It's not like I would have organised anything by next Thursday, anyway, though Hugh has expressed an interest in celebrating. We celebrated last year, in Edinburgh, with a big feast at my friend, Devon's, house. I made him wear a kilt :-) He made a yummy experimental pumpkin pie and he is hoping to improve the recipe this year. I guess I'll have to warn him that he has about 24 hours to do so...or we could just pretend Thanksgiving is next Thursday!
Posted by Kusems at 12:59 PM 2 comments: 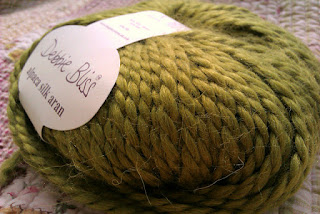 This is my favorite wool in the whole entire world. I'm pretty sure this color has long since been discontinued, but I would swim in pools of this wool if I could. It is the softest yarn I've ever touched. And it's my absolute favorite color.  I would knit every single project out of it if possible.

Sadly, I have not actually had any luck turning it into something. I first made it into a scarf, with an improvised (i.e. very simple and boring) lace pattern. I finished knitting it but didn't block it or weave in the ends for a year and a half. I moved it from one continent, to another, to yet another. And then I realised that I had never finished it because I didn't really like it.

So I undid the whole thing, and tried making socks. Several false starts only to abandon and undo them.

I tried making fingerless gloves. Three false starts, then I finally started getting somewhere with them. But the guage was much too tight, and so were the gloves. Undo.

Then I saw a pattern for long, chunky, cabled stockings in a book. They were beautiful. This yarn was born to make them. 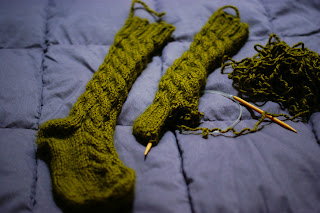 Except I ran out of wool on the toe of the second sock. That was two months ago, and I'm still debating what to do. I'm leaning towards shortening both by a couple cable repeats and hoping for the best. Since it took me three days to figure out how to do the heel properly, and I'm not sure I remember how I did it in the end, I'm a bit wary of undoing it all. But this yarn deserves to be made into something beautiful.
Posted by Kusems at 8:16 PM 1 comment:

My Cap Sleeve Lattice Top is finished. It is rather wide and rather short. 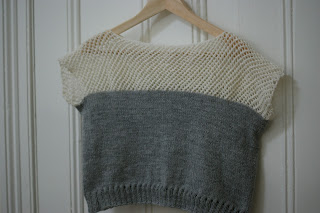 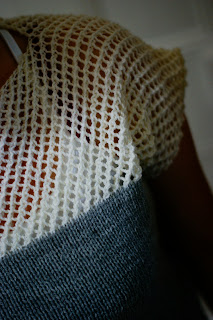 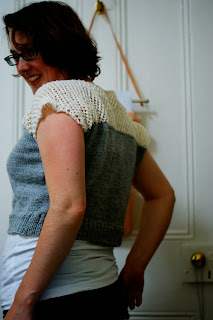 Still, I think it works! I kind of want to make another one, and luckily, Jody asked me to make her one! I'll make it thinner (103 sts was way too many for a small) and extend it lower so your belly doesn't poke out. Then maybe I'll make a dress one for autumn...

Hugh and I got a bit silly during the photo shoot. 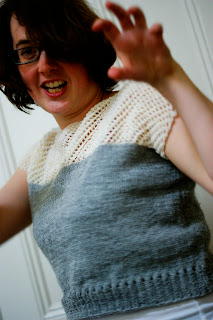 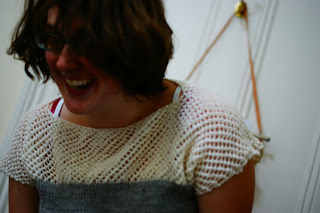 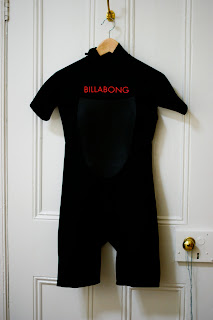 My man bought me a wetsuit today!!! I've wanted to be a little beach bum/surfer girl since I was a kid. I always resented that my parents left southern California before we were born and raised us in rainy grey Seattle. Why couldn't I have grown up in the sun like my cousins? Oh, because L.A. is gross, fair enough.

But now I live in Ausland, and I'm dating a (sometimes) surfer boy, and I have my very own wetsuit! So exciting! I'm kind of terrified of actually going out in the water, but I'm sure I'll be a total natural! Nerdy, uncoordinated scientists usually are, right? I really must start going to the local swimming pool and practicing my strokes...
Posted by Kusems at 7:00 PM 1 comment:

I started with a variety of wools and stitches, but then I decided I was really in love with this one thick and thin wool. The colors make my heart sing. 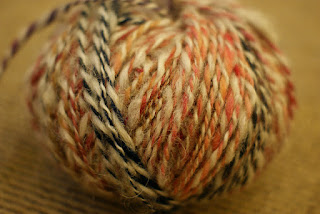 Inspired by the look of this stocking from Knit Collage, I set out to knit a plain stockinette stitch with my lovely wool. It's so beautiful! The white bits soften the colored bits like snow covering a city. Seriously, it's gorgeous.

Buuuuuuut, I made the leg too long and ran out of wool for the toe. In hindsight, I should have just ripped it back, shortened the leg, and finished it. But no. I decided to see if I could knit the toe and heel in another wool, like lots of Christmas stockings are done. Unwisely, I knit the heel in a floppier, thinner wool that looks a bit sad. I cut several rows worth of the wool and knotted it in place, so I'm pretty much committed to the heel, but now I don't like it! Sigh. Someday I'll learn...Photos soon.
Posted by Kusems at 11:53 AM 1 comment:

Ugh, haven't posted in a while...again. It seems the more I have to say, the less I want to say it. I could claim that I'm keeping really busy, and that is the truth lately, but I still spend loads of time staring at my computer screen and could totally write more blog posts. 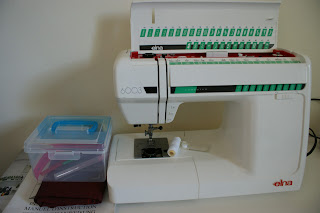