You know what? I love clubbing. It's fun. Alex's friend, Steve, is visiting from Atlanta, so the three of us went out clubbing with Carina and her friends in Chelsea. I kind of like waking up the next morning and thinking, "Did that really happen? Cuz that was weird." For example, did three men really start a fight over Alex? Yep. Did Carina really go home with her brother, two friends, and a guy on crutches? Totally. Did I really dance for a while with an American frat boy, and then suddenly ditch him for no reason? I think so. 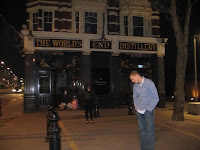 It is very depressing at world's end 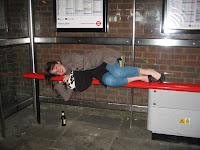 That is not my beer. I don't drink beer, remember?

On Saturday, a few of us went over to Alicia's for tacos. Yum yum! She made the most delicious guacamole. I didn't even know I liked guacamole, but I wanted to eat that stuff by the spoonful. I decided that might be just a tad uncouth, though, so I refrained.

Here is a picture of men in kilts from the St. Patty's Day celebration at Trafalgar Square (which was totally lame by the time we got there). 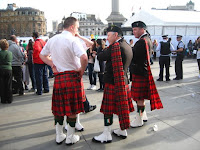 And if you go here, there are pictures of Emily, Stonehenge and Oxford. Yay!!
Posted by Kusems at 10:41 PM 3 comments:

Apparently, acid reflux, or "nocturnal gastroesophageal reflux disease," is highly correlated with sleep apnea, and a randomized placebo-controlled trial done in August of last year showed that treatment of patients with an anti-reflux drug greatly improved their daytime sleepiness. HMMMMM!!!! Guess it's time I called the doctor and scheduled an appointment to talk about my symptoms of acid reflux.

I don't have much faith in the NHS, though. I had a microspirometer test a couple weeks ago (meaning I slept in my own bed with a tiny machine attached to my hand that read oxygen levels), and the doctor sent me a letter to schedule a follow-up appointment...in mid-June. JUNE! I first sought care for my sleep disorders in OCTOBER. Grrrrr...

Anyway, this information is getting my hopes up that I can actually get effective treatment for my sleepiness. This is bad. Hopes are better kept very low, so that disappointment is not as great when hopes are shattered. But very interesting information nonetheless...

In other news, I decided not to go to Stockholm after I visit Ingo in Germany. Carina will be in Switzerland ("home" to her, even though she's British), and I'm going to visit her instead! Alex will be there, too, so it should be WONDERFUL!!! I love these girls. And I might get to speak French, maybe.
Posted by Kusems at 4:49 AM 3 comments:

The weather is GORGEOUS today! I walked to the grocery store this morning in flip-flops and a light sweater. Well, I was wearing other clothes, too.

Well, I survived outbreak week! In my Epidemiology and Control of Communicable Diseases class, we had a three-day outbreak investigation to be conducted in groups. We were first split into those investigating an outbreak in a developed country and those doing the same in a developing country. (I was developing, of course.) Then we were split into smaller groups of about 6. My group was pretty good. Could have been better, but also could have been a lot worse. Some of us were assigned characters and given a small amount of information, then we had to interview each other. Each group had to design a questionnaire to collect information from people, including what food they ate at the funeral. We started on Wednesday afternoon and had to turn in a final report (with charts and figures!) by Friday "evening."

For the developing countries, our scenario was that there had been a funeral in a small African village, and most of the attendees later became sick with watery diarrhea and vomiting. Three people died from the illness. We had to figure out what food or water source (if any) had been the source, and how the food or water source had become contaminated. The story turned out to be pretty gruesome. The original woman who died, for whom the funeral was held, had died of a diarrheal illness. Her daughter then "prepared" her body for burial, including conducting an enema. There had been no soap in the town for two weeks, so she didn't wash her hands. She then immediately prepared rice with goat meat sauce for the funeral the following day. It is unknown how she stored this contaminated food, but I think we can assume she didn't have a refrigerator. Nasty, huh? And we had to figure this out by interviewing 45 of our classmates and staff at the school. When figuring out food-specific attack rates (odds of getting sick if you eat any specific item), we found that you had five times increased odds of getting sick if you at the rice with goat meat sauce. Interestingly, peanuts appeared to have a protective effect, meaning that if you ate peanuts, you had somewhat decreased odds of getting sick versus someone who didn't eat peanuts. So now all my classmates have decided to eat lots and lots of peanuts.

We heard beforehand that this exercise was really intense and that last year, a group spent the night at the school just to finish it in time! This terrified me and I was really worried that I would get an insane group that wanted to work through the night. But when it came down to it, I didn't even care that I was at school until 11pm on Thursday and 9pm on Friday. It was kinda fun! I say that because I wasn't in charge of any of the statistical analyses. Phew! Afterwards, I enjoyed a glass of red wine and some amazing eggplant parmigiana, and I didn't feel sick the next day! (BTW, I've decided I have acid reflux or something, and have been taking lots of Tums, though I realize I should really see a doctor. Eventually...)

Things to do before March 31st:

1. Create a summer project for myself (since no one will give me one) and submit ethics approval application
2. Write tuberculosis essay
3. Write social epi essay--requires knowing how to critique a published article, which I don't as yet know how to do
4. Study for and take ECCD exam
5. Plan joint birthday party for myself and Penny
6. Plan Easter break vacation

It doesn't look quite as overwhelming and stressful in list-form. But those essays are both gonna be doozies. Ugh. Back to work!
Posted by Kusems at 4:46 AM 2 comments:

Hello again! I've been feeling out of touch with home lately, as I really haven't talked to anyone online, nor have a written any letters or postcards in ages. I'm going to make a concerted effort to do more of that, though!

I've been keeping busy as always over here. Last weekend was my friend, Patricia's birthday, and we went to a comedy club that turned into a nightclub later in the evening. I'm still not drinking booze, but that didn't stop me from dancing my little heart out. Wednesday was Alex's birthday, so a bunch of us went out for yummy Mexican food. People told me to avoid all North American foods over here, because they are incapable of doing them properly, but it's a lie. On Goodge Street, there is a WONDERFUL burrito place called Benito's Hat, and on Charlotte Street, which is just off of Goodge St., there is a Mexican restaurant called La Perla which is also delicioso. That's where we went for Alex's birthday. They have a picture on the wall of a guy surfing on a Corona bottle. Love it!

On Thursday, Emily flew in to London. Yayyyy!!! Rania and I went to meet her, but there was a problem with the subway tracks, so we had to get off in Hounslow and somehow find a way to the airport. It took us about an hour and a half and two different buses from that point. Oh well, all's well that ends well, and by the time we finally got to the airport, the tube had been fixed so we could ride it back to London. I spent Friday and Saturday with the two of them. On Saturday, we went on a bus tour to Windsor, Oxford, and...Stonehenge!!! Emily was really excited because it was on her list of things to do before she dies, and now she can mark it off. Her Majesty the Queen was at Windsor while we were there, but we didn't get to see her. They say it's not uncommon to see her out walking her six Corgi's, but alas, I have no luck.

The weather is super fantastico this morning, so perhaps the three of us will have a picnic or something fun like that. In the meantime, I need to study study study. So adios for now. I miss you all terribly!
Posted by Kusems at 9:19 PM 2 comments: