Visiting the UK Feb: The Cotswolds

I just realized I never blogged about my February UK visit. I was sure that I had, but can't find any evidence of it. Anyhoo, it was my friend, Maggie's, birthday at the beginning of February (same day as Izzi, actually). She's from the Seattle area and used to work with me at the Big A. Her boyfriend, Hugo, is English and his family is rich. They own a ridiculously amazing house out in a village in the Cotswolds. Part of the house was built in the 1500s, and the rest was added on in the 1600s, then remodeled in the 2000s. The neighbors hates Hugo's family because they added under-floor heating in their kitchen, which somehow cut through the village's main power line, so the lights in Hugo's house and the neighboring houses flicker on and off constantly whenever the floor is being heated, i.e. whenever anyone is in Hugo's house. Maggie wrote her master's dissertation from the house, on the topic of gentrification in modern society, and used the village as a case study. I wonder if she included a statement on the necessity of under-floor heating and its effect on neighborly relations. 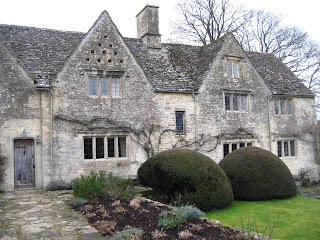 Anyway, it was crazy fun. We went for walks and ate amazing meals cooked by Maggie and fresh bread from the bread maker and Maggie tried to ride Wayne the Pony by throwing herself onto his back. There was even a sword fight! Then Hugo read his granddad's diary, in which each entry ended "I.L.J." for "I love Jill." (Hugo's grandmother's name was NOT Jill.) 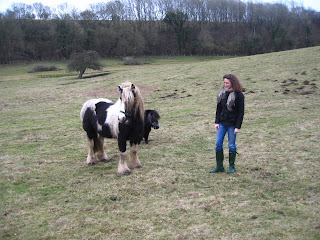 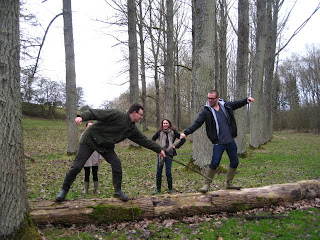 Okay, it's not exactly the UK, but it was a trip that I haven't made since moving to the UK, so it counts, right? And I took the Eurostar, which I've never done before!

The weekend started with a perfect, sunny Saturday in London. For a couple months, Alex had been trying to get me to go to Broadway Market with her some Saturday morning, but I'd been working or she'd been busy and it hadn't worked out. But since my train to Paris wasn't until the afternoon, we jumped on the opportunity to check out the market, which is walking distance from her flat. The weather was amazing and we had a really, really nice time. I spent all my cash on silly, little artsy things, like stickers made from artsy polaroid photographs. Alex bought quality foodstuffs. We walked all the way down to the end of the market before I realized that I'd been there before, possibly twice. Ha! What a goof. 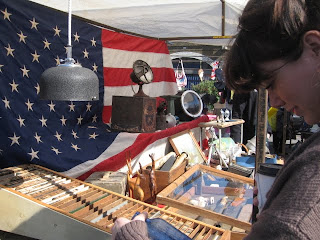 From Bethnal Green tube station, I headed to St. Pancras to catch the Eurostar. It was very exciting! I just barely made it! They started boarding as soon as I got there. The journey was uneventful. I did not follow through on my promise to Tim to have a cocktail on the train. Instead, I read comics and slept, despite the fact that it was only a 2 hour ride. 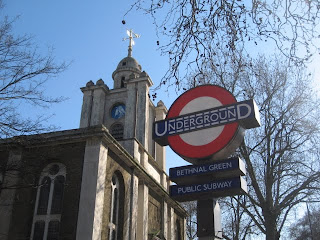 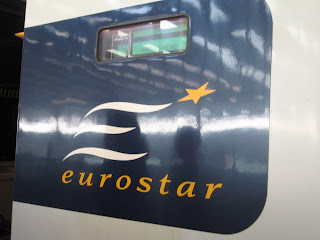 When I got to Paris, I was surprised at how disoriented I felt trying to navigate the Metro. I mean, I have traveled back and forth across the world, alone; I lived in France for a year; I know the London Underground like the back of my hand; I've been to Africa, for goodness sake! How could the Paris subway system throw me for such a loop? I tell you how: Because, of all the countries in the world, France cares the least about whether you reach the destination you were aiming for.

Anyway, I reached my destination without trouble. Jillian rented this gorgeous apartment in the very fashionable and trendy Marais neighborhood. For an hour, I just kept saying, "Wow, this is AMAZING!" We snacked on some baguette, cheese, and salami, then got dressed up for a Saturday night on the town. After wandering for a little while and asking random strangers where to go out, we finally found a bar a short distance from our flat. It was called "Bar Circus," cuz it was next to the ornate Cirque D'Hiver (Winter Circus) building. They played fun Latin music and we befriended the bartender, Alex, and asked him where we should go out from there. As Jillian is more ballsy than me, but doesn't speak French, she would grab a passing stranger and say, "Excusez-moi..." That was my cue to jump in with the mad French skillz, which were much rustier than I had hoped. After we'd been there about an hour, a group of young people got up to leave and Jillian grabbed one of the girls. "Excusez-moi," she started. I stuttered out a query about where they were headed, but the girl's answer completely befuddled me. "Pardon?" I asked. "Just come with us," she replied.

So we followed a group of strangers to the subway and on to a nightclub that played the kind of oldies you wish would just die already. Our new friends had all gone to university together in Toulouse, and were super friendly and welcoming. I very quickly got plastered, though of course I didn't realize it at the time, and we danced and chatted the night away, although somehow I don't think I did much talking. Or listening. I'm not really sure how I passed the time.

We slept late the next day, although I was up every hour or so battling a severe hangover. Since it was Sunday and everything was closed, we decided to go shopping. In France, stores aren't open on Sundays, except in Le Marais, which I suspect might have been one of the reasons Jillian decided to stay in that neighborhood! In one of the first shops, I spent 125€ on a silk top with lace trim that has SKULLS in the lace! Isn't that amazing?!? Yes, it is. Dinner was absolutely delicious buckwheat crepes in a very popular little creperie from Brittany. 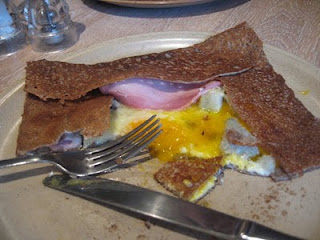 On Day 2, we decided to go shopping. This time, we headed into the city, to the Galleries Lafayette where we perused the handbags and jewelry. Then we visited Coco Chanel's flagship store, where I became hyper aware of my holey and very dirty Converse sneakers. We checked out Herve Leger bandage dresses, then hit up Zara where I bought some ballet flats and a couple blouses. Jillian bought an awesome leather skirt and three pairs of shoes! Then we wandered towards the Champs Elysees, where we actually didn't do much shopping at all, but had some sisterly bonding and grabbed a quick drink before meeting up with Thomas, one of the people we had met on Saturday night.

Because he is foolish, Thomas picked as our meeting point a leather purse store near the Arc de Triomphe. Since he wasn't there when we arrived, of course we had to go in and have a look around. The "look" lasted quite a while and Jillian went home with another bag (she'd already bought 3 at the Galleries). But Thomas, who is very sweet, was very understanding. He walked us through a beautiful big park, then across town to Montmartre, where we ate a yummy, fancy dinner in a cute, tiny little restaurant that used to be an inn. After dinner, we walked up to the Sacre Coeur and got there just in time to watch the Eiffel Tower's hourly twinkle-fest. 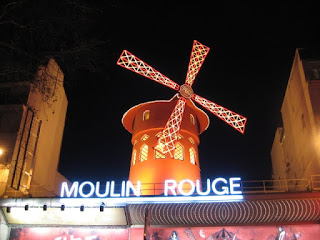 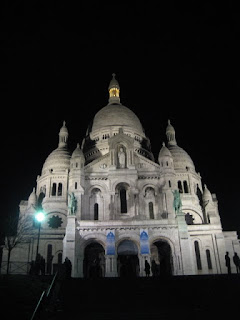 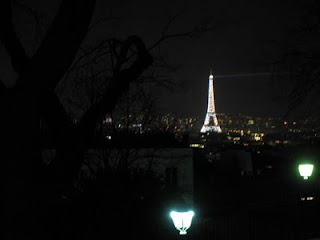 On Day 3, since I was leaving in the afternoon, we decided to go shopping. We re-scoured Le Marais, convinced that we hadn't yet seen all the shops it had to offer. I bought a magnificent pair of deep red high heels that are slightly too high for me to be able to walk in. Oh well, just need to practice! Then I headed to the train station, and again felt like a fish out of water trying to ride the subway. At the train station, I had the awful run-in with UK border patrol which ruined my entire day and made me pout and cry on the entire journey home. But that doesn't matter, because I had an absolutely wonderful four days of shopping in Paris with my Bonus Sister. Yay!

Photos here.
Posted by Kusems at 8:49 AM No comments: