Work meeting=suckiness. Though we were fed a whole roast pig, so I can't really complain.

So the tipping system at this pub (and in London in general) is very confusing and I still don't really understand it. There's a 12.5% service charge put on all bills and this is distributed to all staff on a points-based system (did I already explain this?) Sometimes, people add an extra tip. I was under the impression that these extra or "cash" tips joined the same pot as the service charges. But around the time that I started working there, the company was losing money because some people were apparently stealing stock. To compensate for the loss and punish everyone, they kept all cash tips. Then they caught and fired a couple people and since then, we've been making and not losing money, so now they're going to start giving us the tips again (by adding them to the same pot as the service charge).

That totally sucks, but whatever. What can you do? The meeting also consisted of criticism of the waitstaff and some arguments between we waitstaff and the kitchen staff, and the general manager singling out one girl as the source of all complaints we receive. He actually turned to her and said, "I don't receive many complaints, but the ones I do receive are all about you." Harsh! Then they told us to be happy and enjoy our jobs. Thanks guys!

On the bright side, they said that people who go home for Christmas may not have a job in January, which saves me the trouble of having to quit. Yay!

To be honest, though, I do enjoy certain aspects of working there. I like the people I work with, and the GM is cool, and there is something satisfying about serving tables. When I leave at the end of a shift, I'm never down or depressed or upset. But at the same time, I dread going in for shifts. Especially evening ones, when I've had a nice day of hanging out with friends and I have to say goodbye to them and go expose myself to potential criticism from managers who don't have a clue how many different things I'm trying to do at once.

I realize I'm complaining about work, and work is a fact of life. I've totally forgotten about my goal of being less negative. Okay, here's my attempt to be positive: I only really have to work there another month, and then in January I can start over again trying to find something I'll like better! Onwards and upwards!

Now I'm applying for yet another job I don't qualify for (how many applicants are they gonna get who speak Kiswahili?) Wish me luck!

Just for fun, here are some pictures of Holly's birthday in the 100-acre woods. 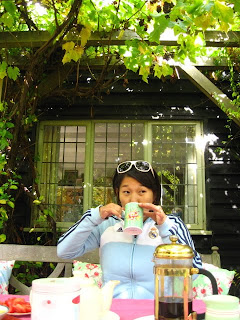 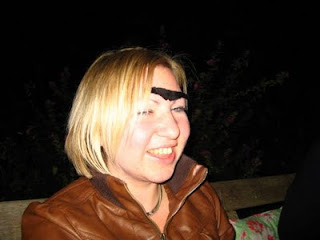